Serrano peppers are a type of chili pepper that originated in the mountainous regions of Mexico. Most commonly, Serrano peppers will be available to buy in stores when they are green in color and ripe.

Serrano peppers can also be red, orange, brown and yellow depending on their degree of ripeness.

These peppers are pretty spicy and have a Scoville rating of 10,000 to 23,000 SHU! That’s hotter than jalapeno peppers, for reference. 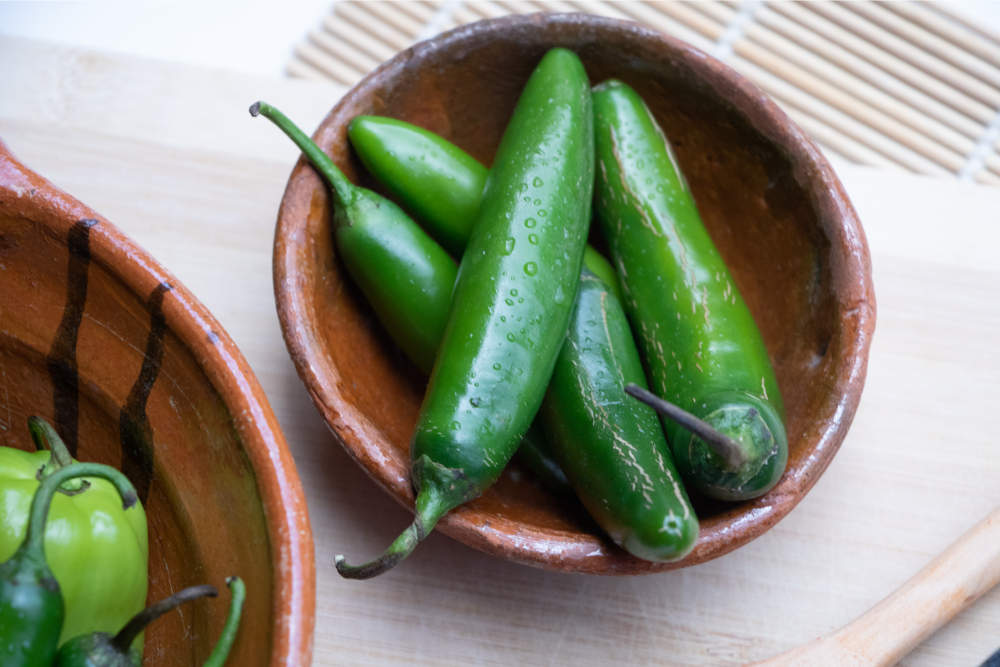 They can be eaten raw, cooked, sliced, pureed, stuffed, pickled and more, and they’re often enjoyed for their crunchy texture and warming heat.

In terms of taste, they will typically be eaten raw and are generally quite fleshy compared to other peppers, so they are often used in dishes such as salsa and pico de gallo.

Due to their delicious flavor that packs a punch, Serrano peppers are one of the most commonly used chili peppers in Mexican cuisine.

While these peppers are often the best pepper for the job, sometimes you won’t be able to find them at the store, or maybe you’re cooking for someone who doesn’t enjoy as much heat so, we’ve compiled this list of our favorite Serrano pepper substitutes to rescue any dish!

Probably the best possible substitute for the Serrano pepper is the jalapeno pepper. They’re closely related to the fruit and are similar in color and shape.

They also taste pretty similar and provide a lovely crunch when bitten into when fresh, although Jalapenos do have a slightly thicker skin which will mean the texture when you bite into them will feel a little chewier than Serrano peppers.

In terms of heat, jalapeno peppers are not as spicy as Serranos, but they still pack a punch. If you want to match the level of heat in your dish, simply increase the number of jalapenos you use.

Jalapeno peppers are also probably one of the most popular and well-known chili peppers, and you’ll never struggle to find them at the grocery store!

If it's that satisfying crunch you’re after, Poblano peppers are the perfect alternative! Poblanos are also closely related to Serrano peppers, as they both belong to the Capsicum annuum species.

These crunchy green peppers also add some heat to meals, although not as much as Serranos.

Again though, if you wanted to match the heat level of the Serrano pepper, try using a higher quantity of Poblanos or you could even try adding some Cayenne pepper powder to match the heat. 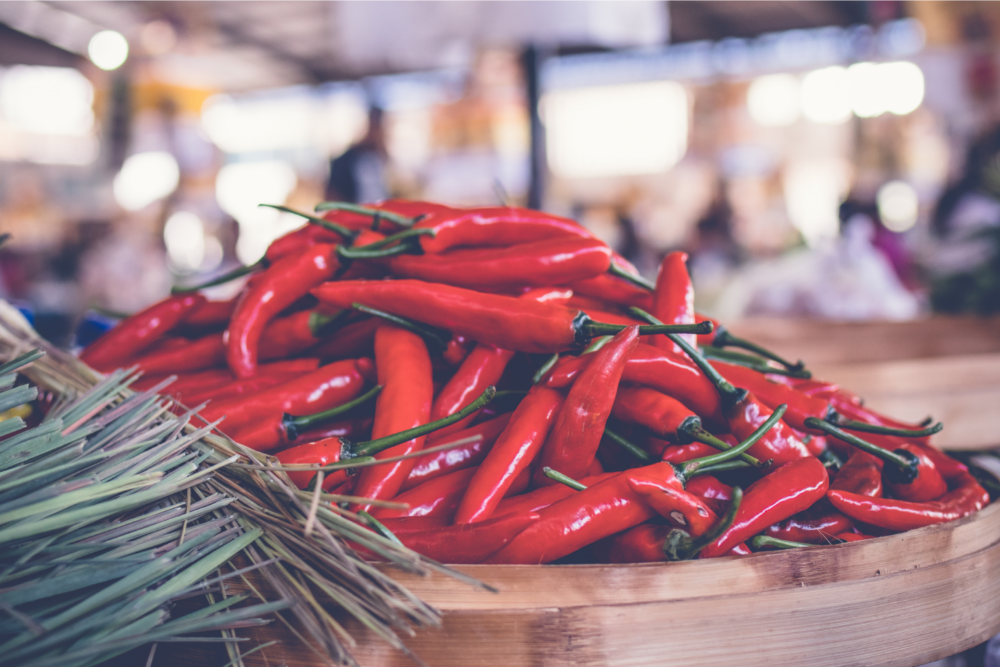 As already mentioned, cayenne pepper is much closer in terms of heat to Serrano peppers than any other pepper.

The cayenne pepper is also a type of Capsicum annuum and is a pretty hot chili pepper. They are long and skinny in appearance and their skin is generally red and wrinkly.

Unfortunately, it’s hard to come across fresh cayenne peppers at the grocery store. Instead, the pepper is more commonly purchased in its powder form.

If you’re only using Serrano peppers for the heat they provide, though, using Cayenne pepper in its powder form will do the job nicely and will actually be much easier to use. Plus, the powder will last longer than fresh Cayennes, so you can store it at home for future use in spicy dishes.

Another option is heat is more important to you than crunch. Red pepper flakes are a super popular addition to most at-home spice racks.

If you need crunch and heat, try using Poblano or bell peppers to provide crunch and ass red pepper flakes to create heat and spice. The perfect substitute can always come from multiple alternatives.

Like Cayenne pepper powder, red pepper flakes can be compactly stored in any kitchen and will last months. Having some in your cupboard will always come in handy if you don’t have access to Serrano peppers, or other peppers for that matter.

This option will provide no heat to your dish whatsoever, but, they will provide that fantastic crunch when bitten into that Serrano peppers deliver.

You will find sweet bell peppers are best. If you’re not a lover of spice, bell peppers make for the perfect substitute. Alternatively, if you want to create spice, simply add some hotter peppers or some Cayenne pepper powder.

Fresno chili peppers are a great fresh pepper alternative. These peppers are much closer to Serranos in terms of heat and are similar in shape to Serrano and jalapeno peppers, although Fresnos are slightly wider and shorter, which makes them a delicious option for stuffing.

The only issue with this alternative is that Fresno peppers may be more difficult to locate at your local grocery store compared to jalapenos or cayenne pepper powder.

That being said, they can be ordered online or purchased at specific stores, if you’re willing to put in a little more effort to find them. 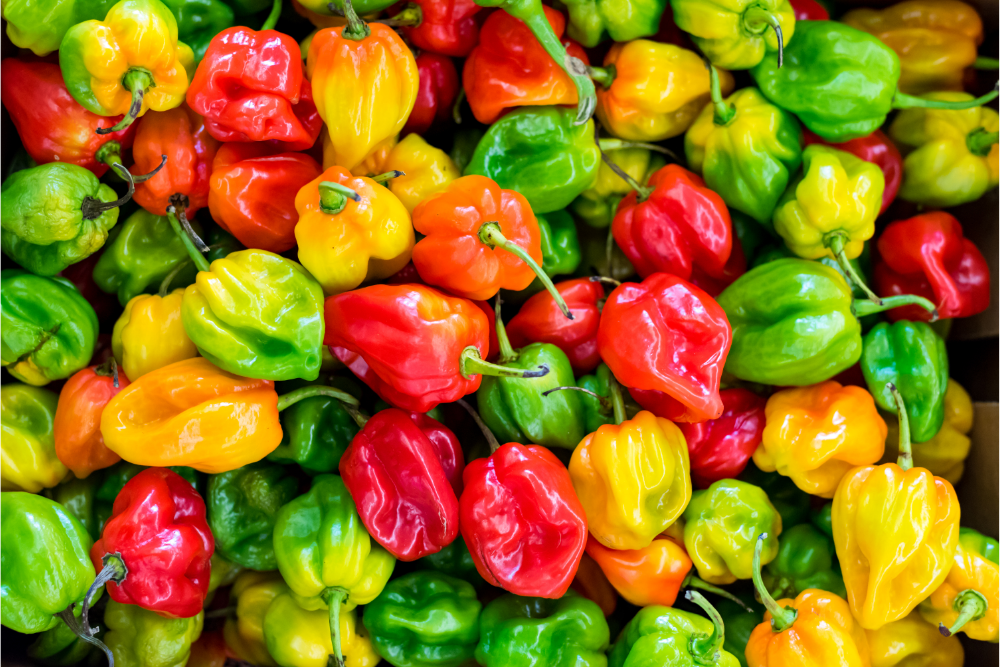 While very different in appearance, Habanero peppers are still a great alternative to Serranos in terms of heat. On the Scoville scale, Habaneros score between 10,000 and 35,000 SHU, which is actually a little hotter than Serranos.

They are typically an orange/red color when used in cooking and are commonly used in spicy sauce-heavy dishes. They are a little different from Serranos in terms of taste too, they give off a more citrusy flavor.

That being said, if spice is important to your dish, and you don’t have access to Serrano peppers, Habaneros will do a great job at matching the heat level while still tasting great!

A good alternative in terms of appearance are Anaheim peppers. These long, thin green peppers are very similar looking to Serrano peppers.

They’re not as hot as Serranos, but are still very popular in Mexican cuisine and can be easily found in supermarkets compared to them.

Anaheims come in at 500 - 2,500 SHU and are closer in terms of heat to Poblano peppers but as we’ve said previously, the lack of heat can easily be rectified by some Cayenne pepper powder or red pepper flakes.

Additionally, you can always add more Anaheims peppers to match the heat level of Serrano peppers.

Similarly to powdered and crushed pepper alternatives, hot sauce will also do a fine job at recreating the heat level of a Serrano pepper.

While this option is more frequently used in dipping sauces and salsas, it can easily be added to recipes that require Serrano peppers.

The hot sauce you choose is entirely up to you, and you can choose one as hot or mild as you like. You may even find that lots of hot sauces contain Serrano peppers.

So, it’s a good idea to gradually add the hot sauce to taste, to ensure you don’t overpower the dish.

This powdered spice makes for a delicious addition to any meal. While it cannot provide the crunch or heat of a Serrano pepper, it does have a similar smoky flavor.

Smoked paprika is made from dehydrated, smoked bell peppers that is commonly sold in the spice section of the grocery store.

If you’re concerned about adding heat back into the dish, you can easily combine some smoked paprika with a pinch of Cayenne pepper powder or red pepper flakes.

If the recipe intends for the crunch of a Serrano pepper, you can also incorporate bell peppers or Poblano peppers with smoked paprika and Cayenne pepper powder.

This may seem like a pretty long-winded route to substituting Serrano peppers, but if you have the ingredients already, it can be a tasty way to replace the pepper.

Serrano peppers are popular additions to Mexican dishes and can be cooked, eaten raw, stuffed, pickled, sliced and more!

They provide a delicious smoky flavor, a satisfying crunch and a warming heat that will round off many dishes.

We hope these Serrano pepper alternatives provided you with some inspiration and will help you next time you’re stuck when a recipe calls for Serrano peppers.