What is not to love about the hot and spicy? There is something alluring in the thrill of the spicy buzz, the zing that travels up and down your tongue, the tingling of the taste buds when you eat hot and spicy food - Mike Hultquist & Patty Hultquist

Contents show
1 There Can Be Only One - The History Of The Serrano Pepper
2 From Hidalgo To Your Home - Growing Your Own Serrano Peppers
3 Finding The Seeds
4 Planting Your Peppers
5 Moving Outdoors
6 Green Or Red?
7 Appearance, Heat, And Taste
8 The Serrano Conundrum
9 Running Low On Serranos
10 And Finally…

Whether you’re a fan of sweet spice-filled heat or the slow, surging burn of a delicious chili, you’ll know that the peppers that are used as a base ingredient to create the intense flavors that you crave are the most important ingredient in any racy dish or fiery food. 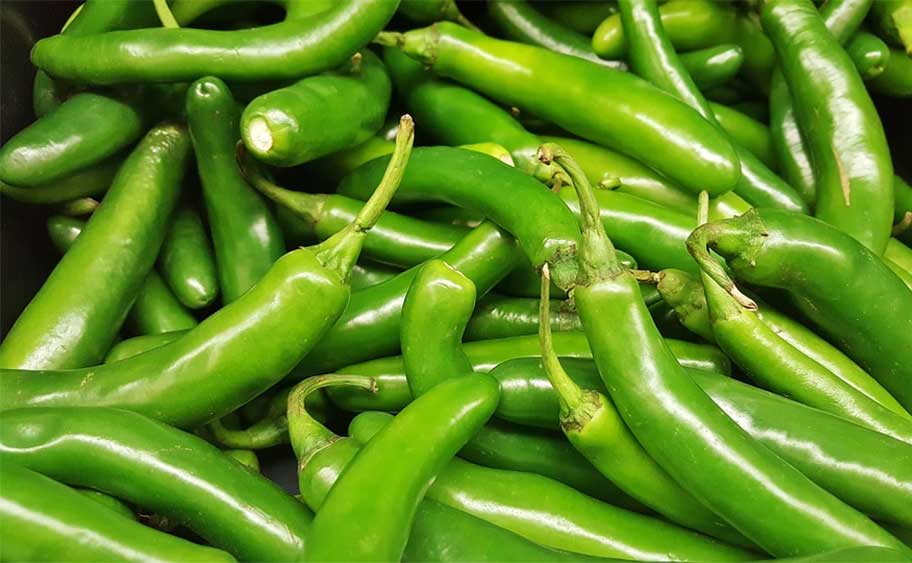 And being a fan of the hotter things in life, you’ve probably spent more than your fair share of time worshipping at the altar of the holy trinity of peppers, the Jalapeno, the Habanero, and the Carolina Reaper.

While the popular pepper trio are all infamous for bringing all of the scorch happy taste to every table, they’re not the only peppers that can turn your taste buds upside down and inside out, as the slightly less well known, but equally powerful Serrano pepper is more than capable of putting a smile on the face of any fan of the afterburn.

If you’re scratching your head and thinking “Why haven’t I heard of the Serrano? What is this mysterious pepper with the intriguing name? Where does it come from, how can I add it to my horticultural arsenal, and just how hot is it?”, don’t worry as we’re going to answer all of those questions and more in our in-depth expose of the pepper world’s secret weapon.

So make yourself a drink, get comfortable, and prepare to have your chili-loving mind blown by the pepper that’s somehow managed to slip under the collective radar of the majority of the global spice community.

There Can Be Only One - The History Of The Serrano Pepper

The Serrano pepper, like its cousin the Jalapeno, is a favorite ingredient of Mexican dishes, mainly thanks to it being native to the Puebla and Hidalgo regions of the country. Its name, which in English means ‘Highlander’ comes from the fact that it favors hillside and mountainous regions and has nothing to do with either Scotland or its heather-bound highlands.

In all honesty, if you did try to grow Serranos in the bonny hills of Scotland, it would be a fruitless endeavor doomed to failure, as the climate of the area is completely unsuitable for the cultivation of this deceptively delicious pepper.

It needs heat, light, and humidity to grow and mature into the flavor-filled pepper that’s been grown, and has been part of the local diet, by Mexican farmers for thousands of years.

The farmers from the areas where the Serrano makes its home have a saying “Fresh is best” and pride themselves on knowing when to harvest the pepper from the roughly forty thousand acres of land in both provinces that are used to grow it. And despite their bright, raging red appearance when they’re sold in stores, most Serrano peppers are actually picked while they’re still green.

From Hidalgo To Your Home - Growing Your Own Serrano Peppers

Just because they won’t grow in the wild of Scotland, it doesn’t mean that you can’t grow Serrano peppers at home. You can, and it’s actually quite easy to create your own stable, and supply, of Serrano peppers.

You just need to know how to do it properly, and with some guidance, you’ll be able to raise your own army of peppers that will be ready to do your culinary bidding and bring more than a little bright, sweet heat to anything and everything that you create in the comfort of your own kitchen.

How do you grow your own Serrano peppers? We’re glad you asked, and we’re going to explain, in an easy step-by-step guide, how you plant, grow and cultivate your own fresh peppers and put all of the heat that you’ll ever want, or need into your daily diet.

The first step on your Serrano journey is actually the easiest one to take, as the seeds that you’ll need to start growing your own peppers are ridiculously easy to come by. Every time you buy a pepper from the store, the origin of the next generation of Serranos is contained within it.

When you cut your store-bought Serranos up and prepare them, just be careful not to throw the seeds out with the rest of the fruit that you’re not going to use.

Keep the seeds, and don’t panic about having to plant them by some imagined pepper deadline. As long as you store them safely and securely in a plastic airtight container, the seeds should last a couple of years, and you can plant and grow your peppers when you want to, rather than when Nature tells you that you have to.

The climate in which they’re grown is crucial for Serrano peppers, and to give your seeds the early boost that they need to begin to germinate properly, they should ideally be planted in seed starters in which the humidity level can easily be controlled, using an organic seed starter.

As Serrano’s prefer warmer climates and wet soil, you’ll need to plant them around a quarter of an inch deep in the starter, and before you push the seeds into it, make sure that it’s moist.

As indoor temperatures can fluctuate, to promote healthy growth, ideally the start trays should be set on a heating mat that’s kept at around eighty-five degrees, and that there is enough direct light (if there isn’t enough light, where the seeds are growing, you can use an indoor LED to control the amount of light that they seeds are getting) to encourage your peppers to grow.

When they start growing, at around a month, you should transfer the seedlings into small, indoor pots that are filled with rich fertilizer. Take your time, and transfer them carefully as the roots are delicate, and you’ll need to make sure that they’re properly covered and firmly planted.

Keep the fertilizer moist, and place the freshly potted pots on the heat mat, and ensure that they always have enough light to continue growing.

As we’ve already mentioned, the climate in which the peppers grow successfully is all-important. When you’re sure that the temperature outside is warm enough, you can transfer your peppers to your garden, but make sure that when you do plant them you use an equal combination of fertilizer and soil, and you regularly water and feed the peppers with a suitable plant food

The Serrano pepper plant isn't big and should start to flower quite quickly after it’s been rehomed outside, which means that the peppers should begin to appear within a couple of weeks, and can be, following the farmer’s lead, picked while they’re green.

However, you don’t need to pick the peppers when they’re green, and they can be left to fully ripen on the plant and don’t have to be harvested until they’re red and have reached full size.

As we’ve already talked about the peppers turning from green to red, it’s probably a good idea for us to take the opportunity to explain why this happens, and what the difference between green and red Serrano peppers is. Mostly, it’s due to age and how ripe the peppers are, as they’re still maturing while they’re green and are only fully ripe when they’re red.

The level of maturity and color of a Serrano pepper can also have a dramatic effect on the way the pepper tastes. Capsaicin, which is found in all peppers, is constantly produced by a pepper, and the older a pepper is, the more capsaicin it contains, which means that red Seran peppers are hotter and sweeter than younger green peppers, and don’t have the same snap and crunch when you bite into them.

The pepper that the Serrano is compared to the most is the Jalapeno, and while a Serrano pepper is usually smaller and thinner than a Jalapeno, they tend to look rather similar as they both belong to the same biological genus.

They’re not dissimilar taste-wise either, as they both possess the same sweet, almost smoky flavor which is why they’re often confused and why the Serrano has spent most of its life in the shadow of the more famous jalapeno.

That’s where the similarities end though, as Serrano peppers are much hotter than jalapenos and while the latter usually measures somewhere between five and eight thousand units on the Scoville scale, Serrano’s are usually three times as hot and measure close to twenty thousand units on the same scale. It’s a difference that’ll be immediately apparent as soon as you bite into a Serrano and your mouth begins to tingle with all of the peppers' sweet, natural heat.

Because they’re so close to the jalapeno in terms of taste, flavor, and texture, Serrano peppers are a great way of adding a little extra heat to whatever it is you’re cooking or preparing and are often substituted for jalapenos when the level of heat from the more famous pepper just won’t cut it anymore.

They’re also delicious when eaten raw, and make a great addition to any salad if you’re looking for more zip in your daily dose of greens.  And if they’re left to ripen, the natural red sheen of a Serrano can transform the way that a green heavy salad looks, which in turn can make it more visually pleasing and appealing to your pallet.

The problem with Serrano peppers is that unless you grow your own, sometimes it’s not always possible to find them in your local supermarket. Demand can often outstrip supply, which can leave you high and dry and searching for a pepper alternative at the most inconvenient of times.

If that does happen to you, and you don’t have your own homegrown supply on hand to plug the gap, you might want to consider using some of these easy-to-find alternatives instead.

Jalapenos - As they’re the closest pepper relatives to the Serrano, if you do find yourself running short of the hotter pepper, you could always plug the gap using jalapenos. You’ll need to increase the pepper quotient in order to attain the same level of heat, but since when was adding a few more peppers ever a bad thing?

Cayenne - The faithful heat answer to everything, if you’re pepper-free and looking to add a little spice and sweetness to whatever you’re preparing, then cayenne powder is a great substitute for any and all peppers. And all you need to do to increase the heat in whatever it is that you’re preparing is add more cayenne. The more you add, the hotter it’ll be.

Bell Peppers - On the other hand, if it’s the crunch that you’re missing, you could always chop up a couple of bell peppers and throw them into the mix. When they’re combined with cayenne they make an incredible alternative to Serrano peppers, and if you close your eyes, you might not, unless you’re a long-time devotee, be able to even tell the difference between the two.

And that’s it, that's all she and we wrote, and now that you know as much about Serrano peppers as we do, you’ll be able to add them to your culinary and dietary arsenal with confidence and fully enjoy the little pepper that could.