Some people taste one hot sauce and put that same taste onto every other hot sauce out there, assuming that there are no other flavors or spices to enjoy.

However, a hot sauce connoisseur will know that this is so far from the truth.

Today we will be looking at the Dragon In The Clouds hot sauce, a sauce created by Hot Ones. There are two brains behind this sauce, one with ample experience in the hot sauce world and the other with plenty of marketing knowledge. 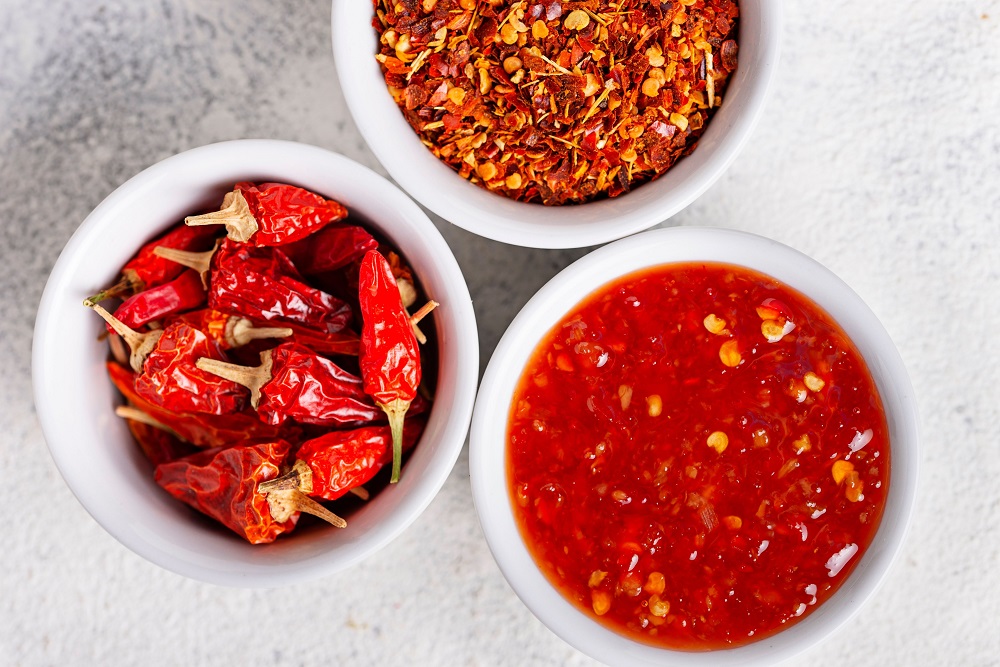 The mix of these two worlds colliding leaves us with the magic that is Dragon In The Clouds. While it only comes in a small 4-ounce bottle, this is all you need to take your meals from okay to insane.

Keep reading to learn more about this hot sauce and whether it sounds like the perfect addition to your life.

Dragon In The Clouds Hot Sauce

Key Features of Dragon In The Clouds

There is an overwhelming citrusy flavor to this hot sauce that tastes like orange and lemon mixed together. Szechuan peppercorns have been added to increase this tangy flavor, and even go further to add a medicinal edge to it.

This flavor is a powerful one and goes beyond just adding spiciness to your food. It also adds flavor, so it might not be the best for every single dish out there.

If you’re not a fan of fruity flavors and citrusy hints, you might not love the Dragon In The Clouds hot sauce. It is very orangey with a great kick of spice.

However, it’s not a sweet orange, but rather a bitter orange that isn’t quite ripe yet.

Overall, the flavor is bitter and citrusy, and won’t work with all foods. It won’t be for everyone, but we have a feeling that it will be an either love it or hate it hot sauce - there’s no in-between.

Moving onto spiciness, the first ingredient is ghost peppers - need we say more? Dragon In The Clouds is one of the hottest sauces that we have ever tried, definitely meant to be used in small amounts. This might be why the bottle is so small.

If you’re looking for an insanely spicy hot sauce, this is the one for you. Pair this with the unique flavor and you have yourself a hot sauce like never before.

Again, some people will love it and some will hate it.

The Scoville scale is a rating system that measures the spiciness of chili peppers, measured in Scoville Heat Units (SHU). It’s based on the concentration of capsaicinoids, which is an active component of chili peppers.

Many hot sauces use the Scoville rating system to measure how hot the product is so that buyers know what they’re in for.

Dragon In The Clouds has been added to the Scoville scale at 1,000,000 SHU, with a Scoville level of 10+. The burn is long-lasting too, so you won’t be able to forget about it for a while.

Again, we’ll reiterate that the first ingredient and therefore the most concentrated is ghost peppers. If you’re familiar with this type of pepper, you’ll know how insane the Dragon In The Clouds hot sauce is likely to be.

The Dragon In The Clouds hot sauce seems to vary in consistency from person to person. Our bottle was quite thick and easy to measure out, but others seemed to receive quite a runny hot sauce.

From comparing our bottle to theirs, seen on YouTube reviews, we definitely think that we lucked out with ours. A runnier consistency looks like it would shoot out of the bottle much quicker than ours, making it difficult to know how much you’re using.

Not only would this waste more of the sauce than you want to use, but it might also take your food from having a spicy kick to being downright unbearable.

Considering the size of the bottle, Dragon In The Clouds hot sauce is not inexpensive. However, the ingredients are difficult to find and therefore make the price point a little more understandable.

These will be hard to supply and expensive to source, so the makers aren’t ripping you off - the price is warranted.

Plus, this is a limited edition hot sauce that is likely to sell out quickly and become much more expensive with its resale value.

So, if you want to try the Dragon In The Clouds sauce, you might as well get it from the direct manufacturer rather than on eBay in a few months.

So, how much is this hot sauce going to put you back? A 4-ounce bottle costs $25 excluding shipping. Shipping costs will change depending on your area, but ours was $6, making the total $31.

While it’s not necessarily breaking the bank, that’s a lot of money for a bottle that only slightly exceeds a baby’s palm. (Don’t feed your baby Dragon In The Clouds).

However, the unique flavor and great spice level promise that this hot sauce is going to be a fan favorite and sell immediately. The packaging is cool too, adding some excitement to your purchase.

Overall, we don’t feel ripped off by the cost of this hot sauce and we won’t think you will either. Some people might be hesitant to buy it due to the flavor might not be up to their liking, but if it sounds good to you then we don’t think you’ll be disappointed.

What Can You Use Dragon In The Clouds Hot Sauce With?

As we’ve mentioned, the tangy citrus flavor is not going to pair beautifully with every single meal.

However, don’t let this put you off right away. You can still use the hot sauce on a number of dishes, but you might need to be a little more creative and adventurous.

There are a few ways that we have found success by using our bottle of Dragon In The Clouds hot sauce. For starters, rubbing it over protein before cooking can be a great way to season the meat without multiple products.

Rub a small amount of Dragon In The Clouds over chicken or fish before cooking to ramp up its intensity. You can also add the hot sauce to the protein after it's been cooked and is on your plate, although the former method will leave it with a more even coverage.

We also like adding drops of this hot sauce to marinades and sauces that we’re making. A small amount goes a long way with this sauce, so start with a few droplets rather than a generous helping.

Adding just a small amount will ensure that you get the most of the spiciness as well as some of the tangy flavor, but not too much to overpower your dish.

The same can be done with tamer dishes that you’re making. Some people just love spice, and we’re some of those people.

Anything without spice is dull to us, so let’s add a few drops of Dragon In The Clouds hot sauce to the pot and see what happens.

More often than not, this trial and error method was a great success. Sure, there were a few times where the hot sauce didn’t mix perfectly with the dish, but there were also times where it worked out great.

Overall, if you’ve been adventurous enough to purchase Dragon In The Clouds hot sauce, you shouldn’t have a problem with adding it to any meal that you think needs a touch of spice.

Was Dragon In The Clouds Hot Sauce Worth It?

Yeah, we think that this hot sauce is worth it if you’re looking for your next culinary adventure. Sure, the flavor is different and the price is slightly higher than we might like, but Dragon In The Clouds does exactly what is asked of it.

It gives your food an unreal kick and offers a flavor rather than just the spice alone.

We think that the hot sauce is high-quality by using premium ingredients, so you’re not being duped out of your money.

If you like citrusy sauces and want a fresh kick from your hot sauce, Dragon In The Clouds is a great choice for you and you should try it. If you don’t like citrusy flavors, maybe you should keep looking.

We’d give it a 4 / 5, but the polarizing effect could mean that you rate it very differently.