When it comes to peppers, there is a huge variety of types and variations, each with different levels of spiciness and heat. The Sugar Rush Peach Pepper isn’t the hottest one out there, but it’s loved by many and has plenty of amazing traits.

It was first cultivated as an accident, with natural open pollination creating it as a new variation from the Welsh Dragon Chilli. 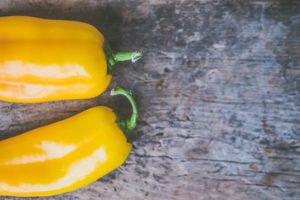 If you’re wondering about the exact origin, or you want to know all of the defining traits and the levels of heat that this specific pepper has, keep reading because we have all that and more! We have even included some information on how to grow your own!

Let’s get right into it!

The Sugar Rush Peach Pepper, as we already mentioned, was first cultivated as a bit of an accident, by Chris Fowler, a pepper grower based in Wales, UK.

However, the Sugar Rush Peach Pepper comes from the Capsicum baccatum pepper species, which is confirmed to have its origins in either Peru or Bolivia.

These peppers were commonly referred to as Aji Peppers, and although they are very easy to grow at home, the Sugar Rush Peach Peppers have taken over in popularity thanks to all of their traits, which make them the overall better option.

You might think that the name “Sugar Rush Peach Peppers” is a bit of a mouthful, and kind of odd. Why are these peppers even called this?

But here’s the thing, the name actually fits the peppers really well. They are very sweet, hence the “Sugar”, they grow a lot faster than other peppers, hence the “Rush”, and they also have an orange-yellowish peachy color, hence the “Peach”.

So calling them Sugar Rush Peach peppers is more than apt!

But let’s take a look at some of the defining traits of these peppers:

Sugar Rush Peach Peppers are quite large in size, with an oblong shape. They also usually have a wrinkled surface and a pointy end. When they begin to grow they are a light green or yellow in color, but when mature they become the iconic peachy orange color that they are known for.

As for the plant itself, they grow really fast and can reach an impressive height of around 5 feet tall. They also provide plenty of peppers, around 40 large ones per plant! (Which is why they are so increasingly popular!)

As we have already mentioned, and as the name indicates, Sugar Rush Peach Peppers are pretty sweet in their flavor. The taste is fresh and slightly vegetal, plus there can be tropical fruit undertones in the flavor when they are eaten raw.

This makes the Sugar Rush Peach Pepper ideal for many different foods and recipes, and it goes especially well in fruity salad dishes.

A popular choice is also to chop them up and use them in omelets for a hot breakfast! Because you can’t forget that, despite being sweet, these peppers are pretty spicy!

When measuring how hot a type of pepper is, there is a special measurement known as the Scoville Heat Units, by which the heat of the pepper’s flavor is rated. (Known as SHU levels in abbreviated form).

When it comes to the Sugar Rush Peach Peppers, there isn’t an exact rating, as of yet, but they are most often placed at a rating of between 50.000 and 100.000 SHU.

To get an idea of what this means, this would place them in between Jalapeno and Habanero Peppers, according to the rating.

So basically, Sugar Rush Peach Peppers are decently hot and spicy, so don’t get fooled by the sweet taste!

Growing your own Sugar Rush Peach Peppers isn’t all that different from growing any other type of chili peppers, and it’s pretty easy as long as you follow the right steps.

However, as the plant for Sugar Rush Peach Peppers grows a lot taller than most other pepper plants (up to around 5 feet in height), you will have to prepare for this by having enough space, and by maybe stalking the plants so that they are supported and can grow upwards in a straight manner.

Here is how to grow your own Sugar Rush Peach Peppers:

Other types of Sugar Rush Peppers:

If you end up loving the Sugar Rush Peach peppers, you might want to check out some similar varieties, which also originate from the same Aji Pepper species.

The word twisty in this pepper variety is accurate, as the pepper pods tend to be very strange-looking and odd.

In fact, they are advertised as being “potentially unstable”, which means that you might not get exactly what’s on the picture. But that’s kind of the beauty of crossbreeding, you don’t know what to fully expect!

This variety is very similar to the Sugar Rush Peppers, and it’s also one of the most common. It has a stronger orange color and has a rich tropical flavor. They take a little longer to grow, but they’re definitely worth it by the end!

The name for this pepper comes from its being a bright yellow color, with a citrus aroma and flavor. (Plus they are very hot and spicy). This variety of pepper is one of the original few, very popular, and commonly used in sauces.