This hot sauce is one of the best on the market, and is served up in restaurants and homes around the globe. 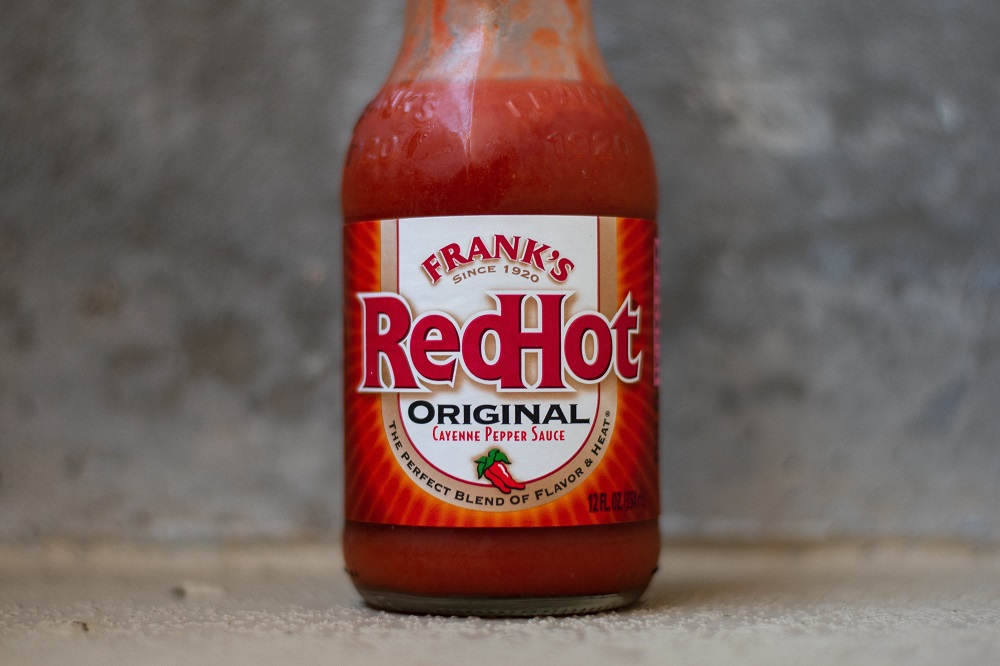 Frank’s RedHot sauce can be used as a marinade, as a dipping sauce, as a drizzle, you name it. This is probably why it is one of the most popular hot sauces widely available.

Frank’s RedHot sauce is one of those condiments that you want to have readily available in your refrigerator at all times.

The great thing about Frank’s RedHot sauce is not just its flavor, it is also incredibly affordable and versatile. This sauce can go on anything, and it’s cost efficient.

So, what exactly is Frank’s sauce, and why does everyone love it. With our review, we will cover the ingredients, the hotness, the flavor, recipes and the history of our favorite hot sauce, Frank’s.

What Is Frank’s Sauce?

During the 1800s, Jacob Frank established the Frank Tea & Spice Company in Cincinnati, Ohio. It was here that the Frank’s Original cayenne pepper recipe was born just a few years later in 1918.

With Frank’s pepper farm, the company was able to create a delicious aged cayenne pepper sauce, and before you know it, Frank’s sauce landed in 1920.

The original recipe of Frank’s sauce has been unchanged even after all these years. As they say, if it ain’t broke, don’t fix it.

Consumers have been loving Frank’s Original cayenne pepper sauce since 1920, and this has been written on the bottle ever since.

What makes Frank’s Original RedHot sauce even more iconic is that it was the actual secret ingredient used for the world’s first ever Buffalo wings, made in Buffalo, New York in 1964.

Since then, restaurants around the world have been using Frank’s RedHot sauce for buffalo flavored recipes to the delight of consumers.

Without Frank’s Original sauce, Buffalo wings and Buffalo chicken, fries or dips would never have been made, and the world would have been a much darker place!

Frank’s sauce is now available in most parts of the world, and found upon restaurant tables without fail. You can even buy Frank’s iconic sauce online

If you like Frank’s RedHot sauce as much as we do, then you should definitely try investing in the one gallon hot sauce.

this way you will never run out of your favorite spicy sauce when you’re making wings, burgers or fries!

With such a success story behind the sauce, you are probably wondering what makes this sauce so special...what’s in the sauce, what’s the secret ingredient that makes us all love it so much?

The beauty of Frank’s RedHot sauce is that the ingredients list is simple. There are no fillers, no artificial flavors or ingredients that affect the flavor. The cayenne peppers are aged so that the heat and the flavor can really come through in the taste.

In addition, the cayenne peppers make up about 35% of the recipe, with distilled vinegar offering the tang that we love, and also acting as a natural preservative for the sauce.

The water is included to give that runny, sauce-like texture, whilst the salt works to intensify the flavor.

With a little garlic as the last ingredient, you really get that flavorful taste, and beautiful aroma in this spicy sauce.

As Frank’s promises, you do get that perfect balance of heat and flavor, which other hot sauces can’t provide. Some have the spice value that you are looking for, but lack in taste, whereas others are delicious, but don’t really bring the heat.

The beauty of Frank’s Original hot sauce is that it goes with everything. As previously mentioned, you can drizzle this sauce on buffalo wings, or use it as a marinade to make spicy chicken breasts, or even put some on your scrambled eggs in the morning.

You name it, Frank’s sauce goes with it!

Is Frank’s RedHot Sauce Good For You?

Frank’s RedHot Sauce is most definitely pasteurized to ensure its longevity, which removes any health benefits that the ingredients may give.

There are very few ingredients in Frank’s RedHot sauce, so you know there are no artificial preservatives, colors or ingredients present, which is a good thing.

The bad news is that Frank’s hot sauce is rather high in sodium, with about 3-4% of your recommended daily intake of salt in every teaspoon.

Frank’s RedHot sauce is not the hottest that we have had, but it definitely provides the heat, whilst also bringing the flavor. So how does it compare to other hot sauces?

Well, the spice tingles the tongue and ensnares the senses, but it does disappear quickly, leaving you wanting more. It also does not burn the mouth or leave that sizzling sensation on your tongue that other hot sauces do.

On the Scoville scale, Frank’s RedHot Original sauce lands at about 450 SHUs, whereas the XTRA hot version of Frank’s sauce comes in at about 2,000 SHUs.

This is why Frank’s Original is so well liked as you can use it on a variety of different dishes to add some flavor and spice, without feeling like your head is going to explode.

There are so many different hot sauces available on the market, but not many live up to the hype or the reputation of Frank’s RedHot sauce, and for good reason. Frank’s is able to strike that perfect balance between flavor and heat, which other sauces just cannot seem to do.

However, if you are looking for something similar because your local supermarket is out of stock of Frank’s (highly likely), then you may be looking for some substitutes. One of the most similar hot sauces to Frank’s Original RedHot sauce is probably Louisiana Perfect Hot Sauce.

This is due to the fact that it has most of the same ingredients, just cayenne peppers, vinegar and salt.

However, the Louisiana hot sauce is lacking in that sprinkling of garlic, but you can always add that yourself.

If you want a really affordable and likable alternative to Frank’s RedHot, then try out Texas Pete Original Hot Sauce.

It tastes very much like Frank’s, and is extremely popular in the Southeast!

On the other hand, Cholula Chipotle Hot Sauce is a similar and widely available hot sauce on the market.

This one tastes a little different to Frank’s RedHot sauce, but it has its own distinct and delicious flavor that many people swear by.

If you really want to replicate the flavor of Frank’s, why not try making your own alternative?

How To Make Your Own Frank’s RedHot Sauce

One of the great things about Frank’s RedHot Sauce is how simple it is, so why not make your own? All you need is 20 fresh hot cayenne peppers, 1.5 cups of white vinegar, 1 tsp of salt, 1 tsp of paprika and 1 tsp of garlic powder.

Then, simply clean the peppers and slice off the stems and discard them. Next, cut out the seeds to reduce the heat level, and slice up the peppers into tiny pieces.

Next, throw all the other ingredients, and the diced peppers into a large saucepan, and bring to the boil. Simmer the mixture for about 20 minutes until the peppers are soft.

Once this is done, take the pan off the heat, and leave to cool for about 10-15 minutes. Once cool, place the mixture into a blender and blend until completely smooth. Then, use it for your buffalo wings, or as a homemade hot dipping sauce!

How To Serve Frank’s RedHot Sauce 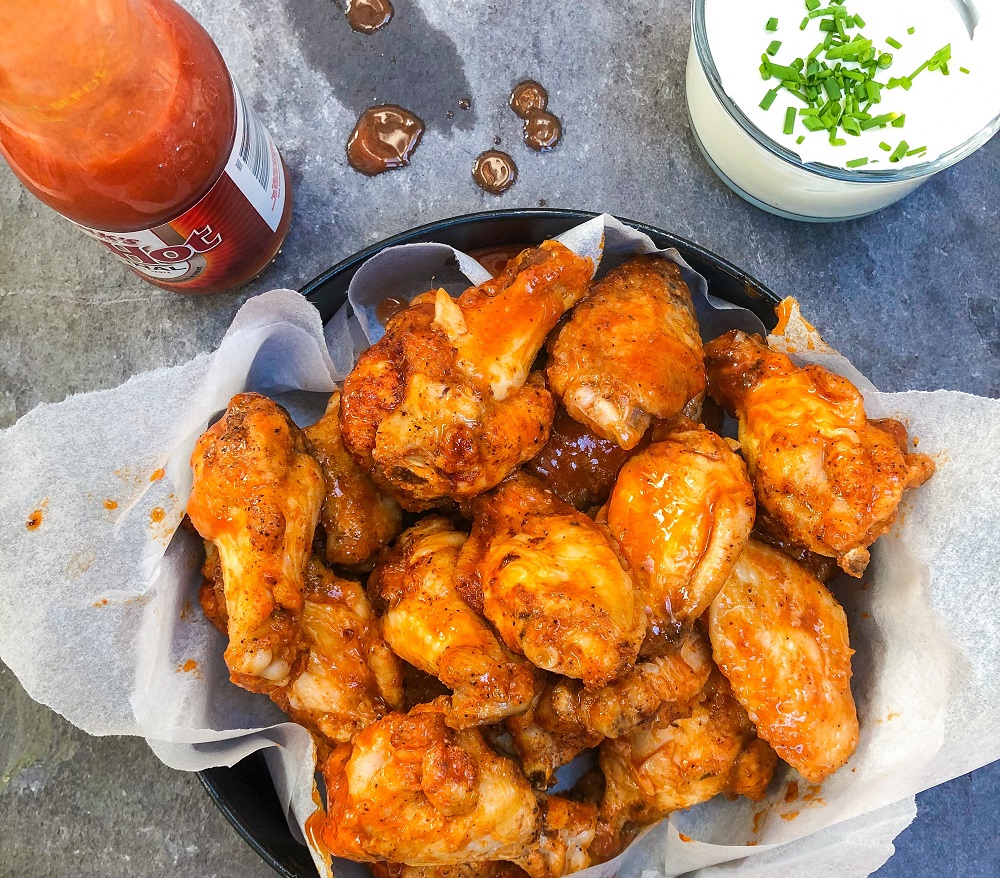 Let’s be honest, the best way to serve hot sauce is with some buffalo wings. Why not try Frank’s RedHot Sauce as a dip for your next round of baked or fried buffalo wings? You will not regret it!

You can also enjoy this hot cayenne pepper sauce as a chip n dipping sauce at your next party.

Why not try baking some fries with grated cheese and smothering it in Frank’s RedHot sauce for a mouth watering delight? If you love spiciness with a zingy tang that you’ll never forget, then start cooking with Frank’s!

Other Frank’s Sauces You Have To Try

We do love the Original Frank’s hot sauce, you just cannot beat it. However, there is one that is very close to our hearts and offers a slightly different, yet mouth-watering flavor. The Frank’s Buffalo Style sauce is one of the best buffalo sauces that money can buy.

When you taste the best buffalo wings you have ever had in a restaurant, they have probably used Frank’s RedHot Original Buffalo sauce on them! It’s just so good. This sauce you can even eat with fries and fried chicken, it is just the greatest condiment for almost anything, and it is so affordable

the small bottle can cost as little as $3!

Frank’s not only does hot sauces, but Sweet Chili

that tastes great with Thai cuisine, or with shrimp for a sweet sensation!

You can also try the Chile N Lime variant of Frank’s sauce for more of a Latin flavor perfect for tacos, fajitas and quesadillas.

If you’re feeling super brave, then why not try out the XTRA hot version of Frank’s Original Hot Sauce.