If you like Habanero Peppers, you will know that they are very well known for their spiciness, and for their addictive taste. They work great in many different recipes, and they are also pretty accessible and affordable to buy, making them a great ingredient in foods!

The problem, however, is that just like many other types of peppers, they don’t really last very long, meaning you have to eat them pretty fast. That is unless you preserve them in a suitable way!

The best preservation method for Habanero Peppers is dehydration. If there is no water in them, then they don’t go bad as fast! The thing is, you need to dehydrate them properly so that they can still be enjoyed and still retain all of their spicy flavors. 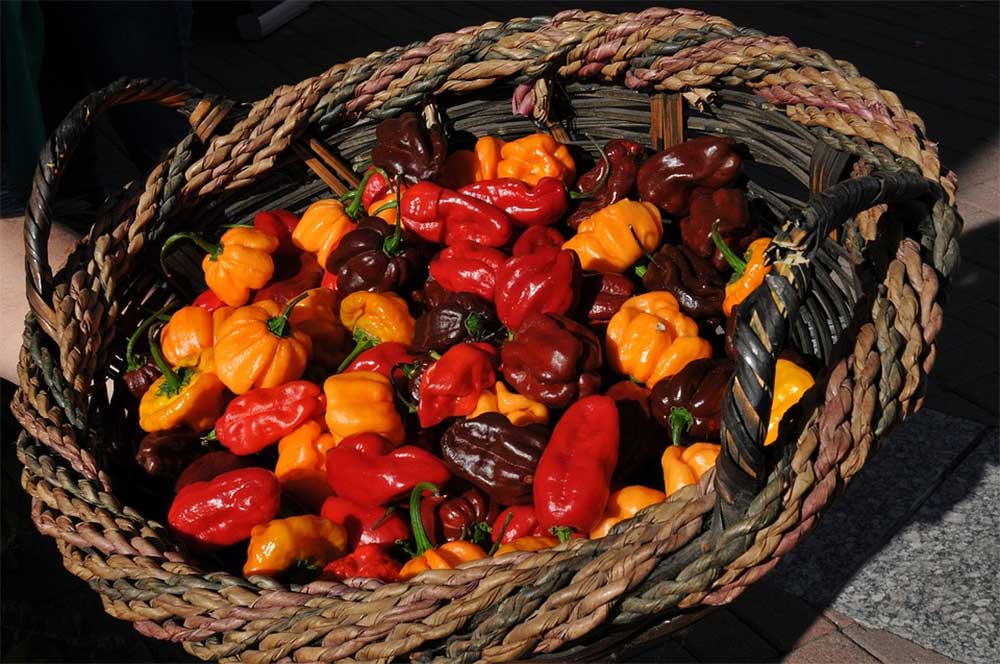 Let’s get into the how of different methods, and we’ll throw in some extra information on top so that you know all the basics when it comes to Habanero Peppers, and dehydrating them to enjoy later on!

Dehydrating Habanero Peppers in a Dehydrator:

A dehydrator is a kitchen appliance that is used to remove all moisture from the food so that it becomes dehydrated and can be better preserved for a longer amount of time. It is most commonly used for different fruits, vegetables, and even meats.

Something similar can be done with the oven, but the problem with this is that it would also slightly cook the food, and in the case of Habanero Peppers, it would remove some of the flavors.

So basically, you need a proper food dehydrator for the job, so that the Habanero Peppers are properly dehydrated while preserving all of the flavors.

When using a food dehydrator, it is important to first read the instructions, so you know exactly how to use your particular dehydrator model. As for dehydrating the Habanero Peppers, it’s important to be aware that it is a slow process. (So basically, start early in the day!)

Not all dehydrators have a temperature setting, but if yours does, then the best temperature for dehydrating Habanero Peppers is between 115 and 125 degrees Fahrenheit. And again, the process should take between 8 and 10 hours, depending on how thick the peppers are!

You can check on the peppers every so often during the dehydrating process, to check on the process. If you do so, make sure you wear gloves for protection! Also, you shouldn’t have to worry about the peppers being in the dehydrator for too long, as they won’t become too dry. Although some people prefer to leave them a little less time so that they aren’t as brittle. Up to preference really!

Dehydrating Habanero Peppers without a Dehydrator:

Using a dehydrator to dehydrate your Habanero Peppers is probably the easiest and most effective method to use, not to mention that it’s also the most comfortable and convenient. However, if you don’t have a dehydrator, there is no need to despair.

There are plenty of methods for dehydrating peppers that do not require a dehydrator, and as there are so many, you can choose the one that suits your needs and preferences the most! (Plus it gives you new ways of going about it, for a little variety!)

Here are some of the main methods of dehydrating Habanero Peppers, without a dehydrator:

The original and traditional way of dehydrating Habanero Peppers is to just let them dehydrate through a natural process. (This was how they used to do it centuries ago before there were any kitchen appliances to help with the process!)

This was done by hanging the peppers outdoors and letting the sun and wind do all the work, removing the moisture and slowly dehydrating them.

However, although this is the traditional method, it isn’t really the most efficient. The problem with natural dehydration is that you completely depend on the weather, so if it rains, for example, then the process is ruined! Not to mention that if you live in a humid climate, the Habanero Peppers will be very unlikely to actually become dehydrated.

But this is a classic method that is worth trying out if you live somewhere suitably warm, and it allows the peppers to retain all of their spicy taste!

Here is a simple step-by-step guide:

The amount of time this process takes will depend on the weather conditions and airflow. It can take a few days, or slightly longer, for them to be fully dry.

If you don’t have a dehydrator, one of the most common methods is to just use the oven, as it will be able to achieve a similar result. However, when dehydrating peppers in the oven, chances are that they will also become slightly cooked, causing them to also lose some of the spiciness.

So the most important factor when using the oven to dehydrate Habanero Peppers, is the timing, so that they aren’t in there for too long that they become completely cooked.

Here are the steps to follow for the best results:

A good tip when using the oven is to leave the oven door slightly open. This will allow for airflow, and will decrease the risk of the peppers overcooking!

Another method, more similar to the natural dehydration process, is using a fan. This might seem like a bit of a hassle, but leaving the peppers in the range of a fan will expose them to a strong and steady airflow that will remove the moisture and dehydrate them.

This method will take a few days rather than a few hours, but it will ensure that the Habanero Peppers retain their color and flavor, which is always a plus.

Here is how to do it:

The good thing about dehydrating Habanero Peppers is that there isn’t really such a thing as being over-dehydrated. Nevertheless, there are drawbacks to leaving the peppers to dehydrate for too long, depending on the method:

The Habanero Peppers should be left in a full 10 hours or even more in the dehydrator, and they will be completely fine. However, if you don’t want your peppers to become too brittle, or you like them to retain a bit of flexibility, then avoid leaving them in for longer than necessary.

When you dehydrate Habanero Peppers in the oven, it’s super important to get the timing right and to not leave the peppers in for too long. This is because the oven will also be slightly cooking them, as well as drying them out, and if the peppers become overcooked they will lose both their color and their flavor, which is less than ideal.

Over-dehydration during the hanging method:

When you dehydrate Habanero Peppers the classic way, by hanging them outdoors or near an airflow, the process takes several days or even longer. (Depending on the environment and weather conditions).

However, once they are dry, you should put them away. Leaving them too long might cause mold to grow or other nasty things to occur, as they are out in the open, exposed to the outdoors.

Over-dehydration during the fan method:

Dehydrating Habanero Peppers by using a fan will also take several days, but there are fewer risks as the peppers aren’t exposed to the outdoors. It is probably the method with the least problems when leaving them out too long.

(However, it’s important to keep turning the peppers over if you want them to dry evenly).

Once you have dehydrated the Habanero Peppers, you will be able to store them away for a longer amount of time, so you can enjoy them at a later date.

But how should you be storing dehydrated Habanero Peppers?

Well, once the Habanero Peppers have been dehydrated, set them aside so that they get the chance to cool down for about an hour or so (in the case of having used a dehydrator or oven, that is).

Once they have cooled down, place them into an airtight container, or into Ziploc bags, removing as much air as possible.

Then, place the peppers in a dry and cool place, where they can be suitably stored.

If dehydrated and stored correctly, Habanero Peppers can last for a year and even longer, which is a far longer time than normal. Plus it means you have peppers all year round!

Here are a few other things to consider when storing away the Habanero Peppers:

Once you have your dehydrated Habanero Peppers, you can do two different things. You can either keep them suitably stored away so that they are preserved until being used and consumed at a later date. Or...you can grind them down to create some Habanero Pepper flakes and powder for seasoning.

If you do decide to grind them down, it is recommended that you only grind down the needed amount, because peppers retain their flavor a lot better when left whole and preserved.

But how do you grind down dried peppers?

Well, there are two main methods you can use:

Using a standard blender is the easiest and fastest way of grinding dried peppers. However, you have to be careful not to blend for too long, or else you will end up with pepper dust rather than pepper flakes or powder!

Also, as the peppers will be extremely dry, blending them might cause some dust clouds of pepper that can be irritating to the eyes and sinuses. So if you are going to use the blender to grind down peppers, make sure you wear a mask and some goggles to protect your mouth, nose, and eyes. And you can also cover the blender with a damp towel or cloth so that it absorbs the clouds of dust from the peppers.

Using a mortar and pestle:

The classic method for grinding down any sort of herbs, spices, or vegetables, is the good old mortar and pestle. It will take longer than the blender, and it also requires you to put in the effort, as you are manually grinding down the pepper. However, it will create flakes with ease, without the risk of ending up with too fine a powder, and it will also avoid any dust clouds that might irritate you.

When you feel like eating some of your dehydrated Habanero Peppers, the best way to go about it is to re-hydrate them so that they regain moisture and weight once more, as well as freshness. However, you have to keep in mind that re-hydrating the peppers won’t get them back to their original size and appearance.

To rehydrate peppers, this is what you should do:

To sum all of this up; Habanero Peppers can be stored and preserved for a far longer time if they are dehydrated, allowing them to then last for a full year or even longer.

Dehydrating them is fairly simple and can be done at home, it’s just a slow process that you need to have the patience for.

The easiest and fastest way to dehydrate Habanero Peppers is by using a food dehydrator, leaving them in there for between 8 and 10 hours.

However, if you don’t have a dehydrator, you can dehydrate the Habanero Peppers by either leaving them out to hang for a couple of days, leaving them in front of a fan for a few days, or putting them in the oven at the lowest temperature setting for around 10 to 12 hours.