When it comes to growing peppers, you want to get the most out of your plant, don’t you? We all know that regular pruning achieves a higher yield, but when should we be doing this? And what should we do about early pepper flowers?

Contents show
1 What are pepper flowers?
2 Should early pepper flowers be pinched?
3 Fertilizing is key
4 Picking Pepper Flower Buds: How to do it!
5 Pepper flowers falling off? Why?
5.1 Over-watering
5.2 Temperature changes
5.3 Over-fertilizing
6 Final Word

Some say we should pinch them early to provide our peppers with more nutrients and a better chance at growing successfully, and some disagree. What should we do? We find ourselves staring at our plants, unsure what to do, pruners in hand, sweat on our brows, to cut or not to cut runs through our head. 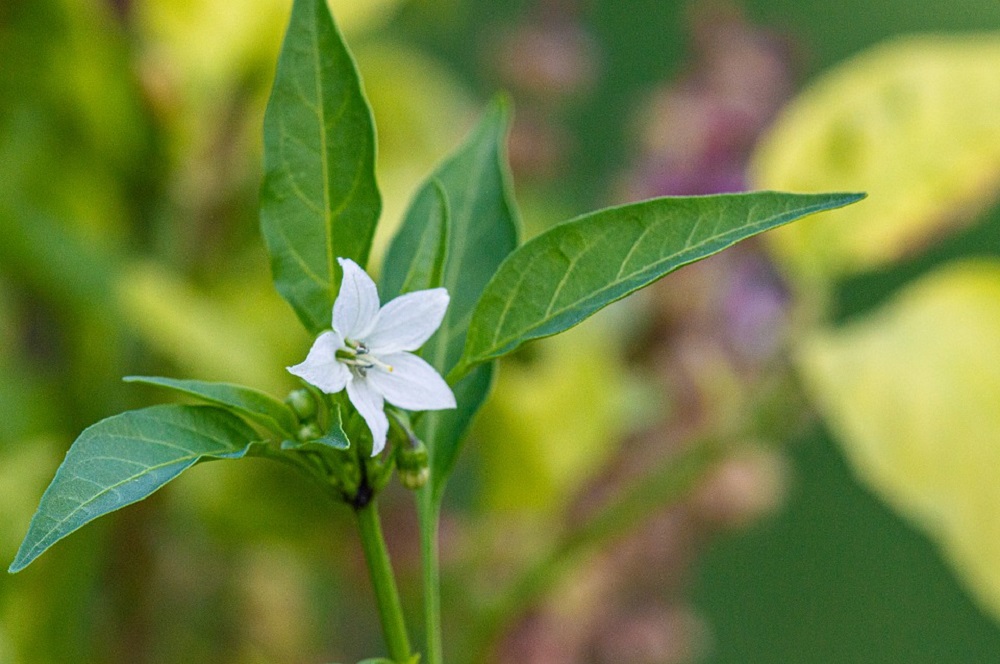 What are pepper flowers?

For those new to the pepper plant world, you might be wondering what these flowers are. Well, let’s bring you up to speed and give the seasoned growers a bit of a refresh!

Your pepper plant will have tiny flowers on them. You might notice them as little buds or small flowers forming.  As we usually start growing our pepper plants indoors in late Spring, it’s not uncommon to see some flower buds forming in April and May.

So what are these flowers? Well, if you leave them there to grow, they will become peppers! These flowers will attract insects to your pepper plants and pollinate the flowers. Bees, butterflies, and other creatures will fertilize the peppers, and the peppers bear seeds.

As peppers self-pollinate, they have both male and female organs. It makes your job easier, as you don’t need to worry about planting multiple plants next to each other to get good harvests. Instead, your pepper plants and nature’s lovely creatures will do the hard work for you!

It all sounds so simple, doesn’t it? Just sit back, watch your pepper plant flower and grow peppers. But that isn’t always the case. Sometimes your pepper plant will flower too early. Small pot sizes, irregular temperatures, and not enough fertilizer can cause this, and you are left wondering what you should do.

But you don’t need to wonder anymore! Let’s take a look at what you should do if your pepper plant starts to flower too early!

Should early pepper flowers be pinched?

Yes, you should prune any early flower buds from your pepper plant! If your pepper plant has been waiting patiently indoors for the sun to shine, your plant might start sprouting flowers. It can be your plant's natural response to limited soil space; when it runs out of room to grow more roots, it moves on to its next stage of growth, producing the fruit, starting with its peppers.

When these start to grow, it’s best to remove them before you move your plant outside. You will want the flowers to grow large enough to be removed without damaging the other young leaves or parts of the plant. Don’t worry; we will discuss in detail how to remove these flowers successfully later on.

For example, if you are growing ghost peppers or habaneros, or other slower to produce pepper varieties, leaving the flower buds attached will help the peppers to ripen. While the flower buds can help slower-growing peppers, for bell peppers, jalapenos, and other faster-growing varieties, pinch those early flowers back!

But when should I pick these flowers, we here, you ask? Well, let’s take a look at that now! The timing of picking these early flowers and planting your pepper plants outside is vital and will determine the success of your peppers.

If your plant has been planted outdoors within the last two to four weeks, then pick those pepper flowers off! Removing them now will allow your pepper plant to focus on producing a larger root system and lots of foliage before switching to fruiting mode and growing your tasty peppers!

After planting is the sweet spot, these two to four weeks, get the flowers gone now, and you can expect your pepper plants to grow more and produce even more peppers down the line!

However, if it’s been a month or longer since your plant has been outside, then it’s best to leave the flowers on your plant. Your pepper plant will have adjusted to the elements, and it’s best to allow your pepper flowers to develop into peppers now. Providing your pepper plants be placed into larger pots, they should continue to grow and expand.

These plants will hold off on producing flowers until they reach a mature size. You must do this correctly and do your research on transplanting pepper plants so that you don’t damage them or hinder their growth in any way.

When it comes to your pepper plants, it's best to plan ahead! Schedule your seeds according to your planting zone to avoid planting too early and having a room full of plants ready to go outside at the wrong time of the year! Unless, of course, you have a glasshouse, which can be a handy solution for early plants!

Nitrogen helps the plants produce stems and leaves instead of fruit and flowers. Using a high nitrogen fertilizer should stop your pepper plant from flowering too early and allow the stems and leaves to grow at their usual rate.

Check the nitrogen levels in your current fertilizer and switch to something with a higher volume of nitrogen if the levels seem low. There are plenty of fantastic options that you can choose from; just ensure the fertilizer is suitable for pepper plants (it should say on the label).

Once your pepper plants are all grown up and reached maturity, usually mid to late July,  you have two options. You can stop fertilizing all together, or switch to a fertilizer with less nitrogen.

There is no right answer here; select the option that suits you best! It’s worth noting that the maturity of pepper plants will vary depending on where you live; mid to late July is a rough guide for those living in the Northern Hemisphere!

Picking Pepper Flower Buds: How to do it!

The last thing you want to do is damage your pepper plant when removing those early flowers. Thankfully, we have some tips to help you remove these small flowers without causing damage to your pepper plant!

The flowers on pepper plants tend to grow in tight bunches around new leaf growths, and each flower will be surrounded by new leaves, making removal a little tricky. Leave any tiny flowers growing until they are large enough to remove; you risk damaging the leaves or the stem if you remove these tiny flowers!

Tweezers, as we mentioned, are helpful to get the precise angle and pluck when removing these flowers, but you can use your fingers to pull your flowers off in an upward motion if you wish.

You can also remove any tiny peppers that have started growing early too! Removing these will allow your pepper plant to focus on the leaves in branches instead of growing fruits and seeds before it’s ready!

Now that we have looked at removing these flowers, you might be wondering, when do I stop picking flowers? We recommend that you stop picking flowers when your pepper plant has been in its final planting place for 3 to 4 weeks. At this point, your plant will have plenty of time to grow a decent root system and acclimate to the weather.

For those in the northern hemisphere, stop pruning your flowers around mid-June. You should notice that your pepper plant is growing to a healthy size. It’s around this time that your plant will set fruit and start producing peppers! Allow plenty of time for your peppers to ripen fully by the end of the season, and enjoy your delicious peppers!

Pepper flowers falling off? Why?

As well as early flowers appearing, you might notice that your pepper flowers drop off instead of growing into peppers. This often happens during the late-stage growth of the plant and can be frustrating, especially if you don’t know why. Luckily for you, we are going to look at the three most common reasons why this happens!

Over-watering is a common mistake when it comes to growing peppers and is one you can avoid easily! Your pepper plant will be happier when they are slightly dry than soaking wet, so avoid over-watering where possible!

Your pepper plant will want moist roots with good drainage, making pots an ideal home for them! Whether your pepper plant is in a pot or a garden bed, water needs to escape from the root system. Too much water can suffocate the roots! If this is happening, you will notice yellowing leaves, leaves, flowers falling off, and even root death!

Temperatures change throughout the day, and your pepper plant can cope with these. What it can't cope with is dramatic temperature changes or excessive temperatures!

Ideally, your pepper plant enjoys warm weather; in the day, they should be in temperatures between 75 and 80 degrees Fahrenheit and temperatures above 60 degrees at night.

If it's too hot, your flowers can drop off! In heatwaves, place your plants in the shade and provide them with plenty of water to prevent this; similarly, if you expect a cold snap in the night,  bring your potted plants indoors or cover any outdoor plants with a fabric cover for protection against the colder weather.

As we mentioned earlier, the correct fertilizer is key to your pepper plant's success! As your pepper plant grows, you will need to move from a high nitrogen fertilizer to a lower blend or no fertilizer at all! Reducing the nitrogen content will encourage your plant to produce flowers instead of leaves.

Too much nitrogen is a common cause for flowers to fall from your pepper plant and can slow the growth down altogether! By August, you will want to reduce the nitrogen content in your fertilizer or fertilizer entirely to prevent flowers from falling!

And just like that, we have come to the end of our pepper plant journey today! As we have discussed, you should prune your pepper plants’ flowers if they develop early to give your plant the best chance at growing tasty peppers at the correct time!