Sweet Baby Ray is a brand born in the 1980s, and conspicuously not born on the back of its hot sauce. It was born when Chicago brothers Dave and Larry Raymond decided to compete in local barbecue competitions.

Yep – the fact that when you say Sweet Baby Ray, your mind goes first and foremost to the brand’s barbecue sauce is no coincidence. It was its success in barbecues sauce that gave the company a platform for its frankly dizzying range of sauces.

And credit where it’s due, by the time the Raymond brothers sold their sauce empire in 2005, it had a revenue of $30 million and 21% market share when it came to barbecue sauce. Second best-selling barbecue sauce in a nation that treats barbecuing like one of its national sports – not too shabby.

But what about the hot sauce?

That’s a slightly odder story. Sweet Baby Ray is less of a stellar name in the world of hot sauces, but that doesn’t reflect fairly on a sauce that’s on a par with Frank’s RedHot or Texas Pete Original. The issue with Sweet Baby Ray’s hot sauce is that it’s not necessarily different enough from either of those sauces to justify necessarily choosing it.

And, because Sweet baby ray as a brand has gone into out and out sauce mania, there’s a chance that most of the usual things you’d use a hot sauce for, there’s a special Sweet Baby Ray’s sauce for, which muddies the reasons why you’d choose it even further.

Sweet Baby Ray’s hot sauce is a perfectly good artificially-thickened Louisiana-style hot sauce with a relatively low but highly amenable chili kick. As such, you can use it on anything you like, and be sure it will probably cling to your food, deliver a warming tingle and improve your dishes. Unlike Texas Pete Original though, Sweet Baby ray has a less intense initial vinegar hit, so it can be friendlier to soups, stews, and sauces, bringing the tingle of warmth without that zing of raw-wine vinegar sharpness.

The heat of Sweet Baby Ray’s Hot Sauce is never going to challenge anyone’s sanity – it belongs in the safer end of the Scoville pool, between Frank’s RedHot at 450 Scoville Heat Units and Texas Pete Original at 750.

It’s a sauce you can confidently add to anything you like, but which does better in some soups and sauces than many of the Louisiana-style hot sauces because of its milder vinegar note, and its dried garlic component.

The aged cayenne pepper in the sauce will give you a good tickle of heat without ever threatening to blow your head off with a capsaicin shotgun, so it’s quite the friendly addition to fried food, eggs, nachos, you name it. The dried garlic element gives it a little twist on the palate, and people’s reactions to that can differ wildly.

Some people find it acrid and bitter, and they tend to go for Frank’s RedHot or Texas Pete instead. As an ingredient in soups or sauces though, the potential bitterness is eased out, meaning Sweet Baby Ray’s brings a different, slightly richer flavor profile to any dishes you add it to. 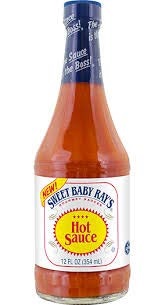 Where to get Sweet Baby Ray’s hot sauce

Availability of Sweet Baby Ray’s Hot Sauce is an interesting question. Certainly, throughout the South, you’ll find it on grocery store shelves, along with many of the huge plethora of sauces the company makes – including a specific sauce for buffalo wings, a sweet red chilisauce, and a sauce specifically for chicken.

Whether you’ll find it on your shelves nationwide is a little more questionable, so if in doubt, you can either buy direct from the Sweet Baby Ray’s website, (which also has a handy ‘Find our hot sauce near you’ locator, based on your zip code!). Alternatively, Amazon, in its ongoing quest to supply everything to everyone, will deliver some Sweet Baby Ray’s Hot Sauce to you in a couple of clicks.

As with most other things, when thinking of the consistency of Sweet Baby Ray’s hot sauce, think along the lines of Texas Pete Original.

It’s thickened with Xanthan Gum, so it’s not an entirely traditional Louisiana-style hot sauce, but that thickening means you can slather it, puddle it, swipe it, smear it, or add it to whatever you like – in soups and sauces, the thickener will become relatively irrelevant, but on things like fried chicken, nachos, wings and the like, you’ll have a hot sauce that clings, rather than dripping, which gives you a more satisfying, ultimately less messy mouthful.

This is a more complicated question with Sweet Baby Ray’s hot sauce than it is with most other hot sauces on the market.

On the one hand, it’s closely positioned in flavor profile and heat between two very popular hot sauces – Frank’s RedHot and Texas Pete Original. Being the middle option between two popular but reasonably distinct alternatives can reduce the case for buying Sweet Baby Ray’s – especially if it’s difficult to find locally, and the other two aren’t.

You’ve arguably got to want to buy it very specifically for its mellower vinegar hit and that uptick of garlic at the end.

Added to which, Sweet Baby Ray’s sauces has, as a brand, diversified almost to the point of madness. There are dedicated sauces for chicken, dedicated sauces with a hot, sweet kick, and so on, so you have to actively think to yourself about what you’re going to use Sweet baby ray’s Hot Sauce for to make it worth buying.

The point about which is there are plenty of things for which it’s perfectly reasonable to buy Sweet Baby Ray’s. But the likelihood that, for instance, if it’s not on sale at your grocery store, you leave the store empty-handed because you need precisely what Sweet Baby Ray’s can offer you is actually pretty small.