Texas Pete Original Hot Sauce has been cornering the market in come-back-next-week hot sauce since 1929.

So, Texas Pete Hotter Hot Sauce was launched to satisfy the Scoville-needs of a nation increasingly demanding a harder kick in the taste buds, and, not coincidentally, to take the hot sauce fight to some of Texas Pete Original’s grocery store rivals – we’re looking specifically and with a glint in our eye at you, Tabasco Classic.

Let’s break out some Texas Pete Hotter Hot sauce and see whether it achieves its goals, or just ends up falling between two stools.

If you’re a surfer, you will know that no matter how fun and exciting the sport can be, it is also extremely dangerous. With the risk of being wiped off your board and hitting submerged obstacles under the water, it is vital to protect yourself with the appropriate safety gear.

Head-related injuries are unfortunately quite common in both amateur and professional surfing. Such injuries can cause unconsciousness and drowning, which is why it is so important to wear a helmet.

The thing to remember about Texas Pete Hotter is that it has the same fundamental flavor profile as its tamer cousin – just three times the heat.

That means you still get a sharp and zingy intro-note with the vinegar, and there’s still not much to overcomplicate the rise of the chili heat. It just goes on longer and takes the heat significantly higher than Texas Pete Original ever dares to do.

What’s that best for? Anything that’s seen the inside of a deep fat fryer and lived. Fried chicken, oh heck yes. Fried potatoes in any form? Fish fry? Tempura vegetables? Definitely. Anything you dip in a batter and then into hot oil, Texas Pete Hotter will set off beautifully.

That’s because the vinegar hit will cut through any greasiness almost immediately, and let the heat of the Hotter hot sauce dance with the hot grease on your tongue. It’s the equivalent of hot and cold, sweet and sour, salt and pepper – the two taste sensations in one lift each other up to a new level.

Where the Texas Pete Original can be splashed on anything you like without necessarily masking the flavor of the food itself, when you go Hotter, you do it for a reason, and it’s a reason that makes most sense when allied with friend food.

Whereas Texas Pete Original moseys into your store cupboard with a Scoville-count of just 740 Scoville Heat Units, Texas Pete Hotter comes packing 2250 SHUs – which puts it within a dragon’s belch of Tabasco Classic on 2500.

That boosts the seriousness of Texas Pete Hotter for chili-heads. It’s never going to blow their socks off, but it makes a decent fist of delivering the heat that serious hot sauce fans crave.

While Texas Pete Original is the hot sauce you can use to introduce younger eaters to the concept of hot sauce, Texas Pete Hotter is the sauce you put on a middle shelf, out of the reach of younger hands. It’s the ‘real thing’ that the hot sauce grown-ups use regularly, for a familiar flavor with a bit more kick.

The flavor is still the more important element in Texas Pete Hotter, and that’s a good thing, because the flavor is almost identical – the vinegar/chili balance which makes it so moreish in the Original version is still here. It’s as though Texas Pete Original is a PG-13 hot sauce.

Texas Pete Hotter is an 18-rated version of the product you enjoyed as a youngster. It’s the same story, just re-cut for a more advanced and hot sauce-experienced audience. 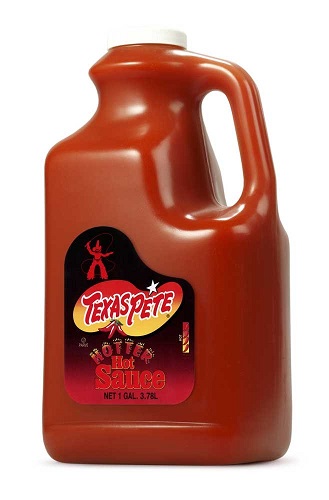 Where to get Texas Pete Hotter hot sauce

Where you can get Texas Pete Original, you can probably find Texas Pete Hotter. That means your local grocery store will probably have it. It’s worth bearing in mind though that because of its more grown-up nature, Texas Pete Hotter may not be available in quite the same quantity in your grocery aisle as its tamer cousin.

Fortunately, we live in the 21st-century, and to save you gas money, potential disappointment, and a scuffle in the hot sauce aisle as you fight off other local hot-heads for the last bottle on the shelf, Amazon will deliver you a gallon of Texas Pete Hotter in a handful of heartbeats.

Yes, the thickening in Texas Pete Hotter is artificial, but you won’t care. It retains the accessibility of the Original version, just with a hotter signature.

The thing with Texas Pete Hotter is that it’s fairly audience-led. People everywhere loved the Louisiana-style vinegar hit, mixed with the balanced aged chili of the Original. But it was always an introductory sauce, rather than a serious contender for a Scoville hit.

People loved what the Original did, but wanted more of the kick. If that’s you, then heck yeah, Texas Pete Hotter is worth buying. If you want that Louisiana vinegar-hit, but you want the heat-slope to go higher and hit harder than Texas Pete Original ever will, then reach for the Hotter and satisfy your hot sauce cravings.

We know what you’re thinking. Why wouldn’t you just go for Tabasco Classic, right?

Because people get used to things, that’s why. If you’ve been raised with the particularly zingy flavor profile of Texas Pete Original, why would you sacrifice the pleasure it gives you just because you want a hotter version? Especially when, as if by magic, a hotter version exists, right there on your grocery shelves or your Amazon wishlist?

You’re gonna go Hotter not just because it’s hotter, but because all the rest of it is familiar from the Texas Pete Original.