If you’re unfamiliar with The Source, the fastest way I can get you up to speed is by mentioning that the warnings distributors apply to this demonic brew read like the print on the back of industrial-strength weed killer or bleach.

If you and those around you wish to keep on living, you cannot get The Source on your skin, use it where children or pets play, consume it directly, or use it without wearing safety glasses.

Sounds gnarly, right? Well, that’s because it is. I’ll assume that if you’re reading this review, you’re aware of the hit YouTube interview show, Hot Ones, and thus, you’ll know what I’m talking about when I mention celebrity destroying sauce, Da’Bomb Beyond Insanity.

Well, I’d like to finish this intro section by casually letting it slip that The Source is just under FIVE TIMES HOTTER THAN THE DA’BOMB!!!

Breaking The Source Down

Sound good to you? You can check prices here: The Source Hot Sauce

Is The Source Any Good?

I’d love to surprise you and say, actually, for all its raw power, a little bit of The Source will go down a treat on a crispy wing or some chargrilled broccoli, but it would simply be a lie.

This stuff is the devil’s work. It’s not even technically a sauce, rather a pure pepper extract that will literally burn away a few layers of your flesh if you get any significant amount on your skin.

The first hot sauce I’ve ever tried that comes with a pipette style dropper, you know from the outset that it’s not going to be your new way to kick the backyard BBQ up a notch. No, The Source is more suited to melting holes through the Earth’s crust and laughing at the meager comparative heat of its molten core.

The Source could be used as a torture device — no jokes! But, to be fair to Original Juan, the creators of this murder tonic, it’s supposed to be diluted A LOT before use on any food.

Perhaps if you’re making one of your favorite homemade sauces for a meal, but you forget to buy the chili flakes, you could add a single drop of this into a vat of the sauce, and there’s a chance it won’t set your guests’ tongues on fire immediately.

If you plan on trying it straight from the bottle as I did, be safe and dip the very end of a toothpick in then give it a lick. It’s more than you’d ever need.

Scoville and Spice and All Things Nice EVIL!

The Source has a Scoville rating of 7.1 million. To give you Hot Ones fans out there a bit of context, their infamous The Last Dab hot sauce measures in at 2 million Scoville, which means that...you’ve guessed it, The Source is essentially just liquid sun.

As I mentioned earlier, The Source is a pure pepper extract, and that’s basically all the information the packaging gives you. I don’t care how tough you are, a drop of this will bring tears pouring down your sweaty face. There’s no way around it.

If you’ve watched any of the YouTube videos of people suffering their way through taste tests of this sauce, you’ll be aware of the strange signature effect it has on the ears.

I was a little curious if this was just people exaggerating to get across just how spicy it felt in the mouth, but lo and behold, they weren’t just using it as a descriptive device; they were telling the truth. My ears were ON FIRE after a single toothpick lick.

The rest of the spice pain is situated towards the back of the tongue and all the way down your throat. I’ve heard it described as someone reaching down your neck with sandpaper and grinding it against the tender internal tissue, and I’d say that’s a fairly accurate depiction. 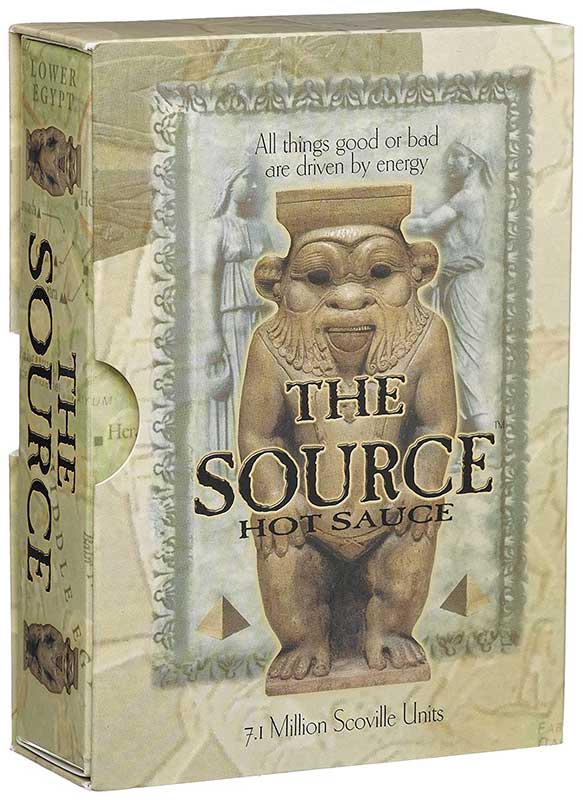 Consistency of The Source

The Sauce isn’t by any stretch a marinade or dipping sauce, so it’s not viscose at all. It’s actually kind of watery, which I’m sure lulls some people into a false sense of security before they try it.

It needs to have a very thin consistency so the dropper applicator doesn’t clog, but the real reason is most likely to prevent people from accidentally applying too much of The Source to anything.

Would I Try or Buy The Source Again?

That’s a strong NO from me, folks. The Source doesn’t even exist within the same realm as typical hot sauces, even the ones known to be so hot they straight-up give you food poisoning.

As much as I disdain how much this tiny 1oz bottle of death costs, in some respects it’s still a great deal because, realistically, there’s no way you’ll get through more than one bottle in a lifetime. When you think of it as a practically endless supply of fire liquid, The Source may sting, but the price...not so much.

Despite, not the dislike, but complete and utter terror this hot sauce inspires in me, I feel it does have a pretty strong appeal to the spice lord enthusiasts out there who’d just like to have it for the sake of having it.

It makes a great display piece in the kitchen, announcing to guests that you don’t f****  around when it comes to hot sauce. If that appeals to you, go ahead and invest in some of The Source.

Ultimately, though, The Source is where taste buds go to die. The packaging might as well say “Beyond here be dragons” or “Get your house in order” and arrive with a gravedigger’s business card. I’d give it a total of 1/5 for pure novelty value alone because make no mistake, this stuff is drawn from the hateful heart of Satan himself.