The Valentina Hot Sauce is otherwise known as the ‘Best Selling Hot Sauce in Mexico!’, and it certainly packs a punch. This hot sauce comes with an unreal taste and aroma, with a pleasant aesthetic that will look nice next to your spice rack.

Today we’ll be looking at the Valentina Hot Sauce and whether it’s a good option for you or not. Everyone has different tastes and wants out of their hot sauce, so it’s good to research your options before opting for just one.

Without further ado, here is our review on the Valentina Hot Sauce.

This hot sauce is not only spicy, but it also adds flavor to your dishes. There are too many hot sauces out there that only add spice to your food rather than an actual flavor. So, the fact that Valentina Hot Sauce already offers flavor is a win in our eyes.

But is the flavor any good? Yes, we think so. It is quite tangy and salty with an unusual sweetness. Plus, you can taste the pepper there.

If you like a salt and vinegar flavor, Valentina Hot Sauce gets the balance just right. We think that this flavor compliments a number of dishes perfectly. You can also use it in marinades to enhance the flavor tenfold.

The consistency of Valentina Hot Sauce is both creamy and quite thin, which would be an issue for hotter sauces. However, as the spice level of this one is quite tame, we’re okay with the fact that the hot sauce runs out of the bottle quite quickly.

Quite a few people have found success with using this hot sauce on their popcorn due to how thin it is. Instead of all sitting at the top of the kernels, it runs further down into the bowl to cover more of the popcorn.

This theory rings true for a number of other dishes, and most people like the fact that the sauce is thin enough to cover all of their food with a thin layer. However, some prefer a thicker sauce, so this might not be the one for them.

We found that the thin consistency helped the Valentina Hot Sauce to mix into our sauces and marinades better.

The only thing that we didn’t like about the thinner consistency was the fact that we couldn’t accurately measure how much we were putting in.

Rather than being able to add five drops into our sauce, we just had to eyeball the measurements.

The ingredients of the Valentina Hot Sauce are simple, with water being the first ingredient and chili peppers being second. There’s also vinegar, salt, spices, and sodium benzoate in the mix.

The chili peppers used are puya peppers, and these come with a delicious sweetness that enriches the flavor of the sauce. However, there is one issue with the ingredients list of the Valentina Hot Sauce.

Peppers are not the number one ingredient - water is. This should be your first indication that this hot sauce is going to use the term ‘hot’ quite loosely.

On the Scoville scale, which is a rating system that identifies how spicy hot sauces are, the puya pepper comes in between 5,000 and 8,000 Scoville Heat Units (SHU). This gives this pepper a similar spice rating to the jalapeno.

Not too bad, right? Well, unfortunately in many hot sauces you don’t feel the overall extent of the spice and the Valentina Hot Sauce only reaches a level of 900 SHU. This is only two levels up from bell pepper.

Considering that the Scoville scale reaches up to 16,000,000 SHU, we hope that you’re not expecting too much in terms of spice for this hot sauce. It is more about the flavor rather than the spiciness, which can be disappointing for some.

If you’re wanting the same delicious flavor of the Valentina Hot Sauce but want a more impressive kick, you can also opt for the extra hot version of this hot sauce.

With a 2,100 SHU level, this is more to the taste of some spice lovers, although it is still quite tame.

Is Valentina Hot Sauce Any Good?

As we’ve just said, everyone has a different taste and opinion on good hot sauces on the market. With that being said, the reviews that we’ve seen for Valentina Hot Sauce, as well as our own opinion, indicate that this hot sauce is a great option for a lot of people.

Below we’ve looked into a number of key features about this hot sauce that might allow you to make a decision on whether it’s to your taste or not.

Where To Buy Valentina Hot Sauce

You can buy Valentina Hot Sauce on Amazon and eBay. This is an incredibly inexpensive hot sauce, probably due to the fact that it isn’t very spicy, and it is also very easy to get your hands on.

You can also purchase the Valentina Extra Hot Sauce online as well. This has a slightly hotter Scoville level at 2,100 SHU. 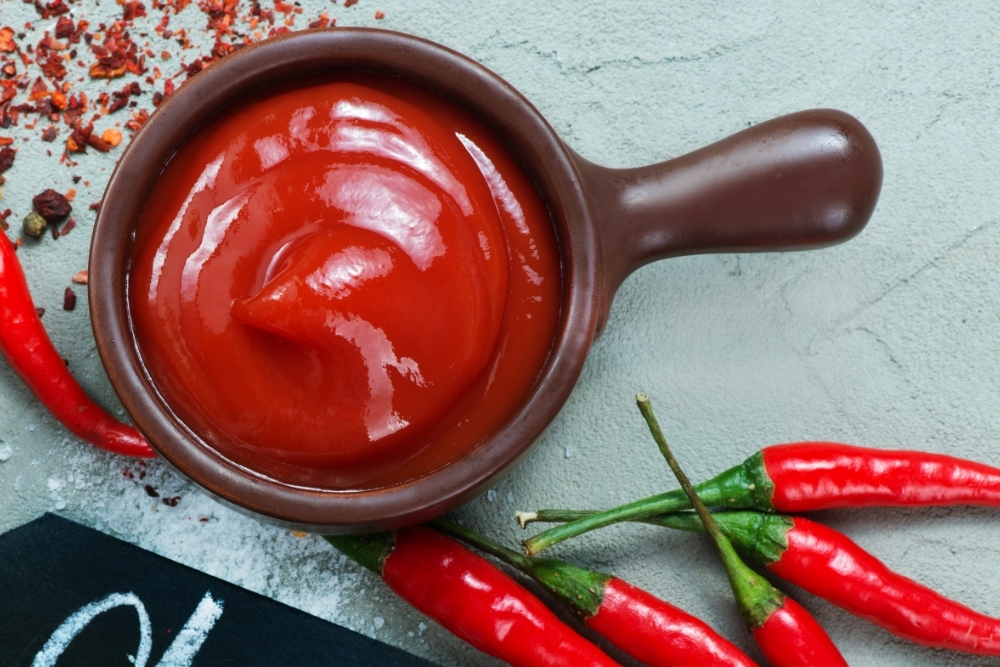 Is Valentina Hot Sauce Worth It?

Overall, we think that the Valentina Hot Sauce is worth it in terms of its flavor and price. The flavor is bound to enhance any dish with numerous spices and aromas, such as vinegar, salt, and paprika. It will also give your dish a subtle kick that is enough to add to the dish without overpowering it.

The low spice level won’t be up to everyone’s taste, and you might be a little disappointed with how small the kick is. However, a large bottle is very inexpensive so you won’t feel like you’re losing too much on your purchase. Plus, your food will still taste nice and better than it did before.

Hopefully, after our review, you’ll know what you’re in for, so if you do buy it you won’t be surprised by the subtle spice. Either way, we hope you enjoy it!