Pepper is a seasoning found in almost every meal we consume, but who knows actually what it is or where it comes from? The pepper plant is known as Piper nigrum and is the climbing form of the plants in the family Piperaceae.

Contents show
1 Where does the pepper plant come from?
2 Why is pepper spicy?
2.1 Black pepper
2.2 White pepper
2.3 Red pepper
2.4 Green pepper
3 What about the other peppers?
3.1 Pink peppercorn
3.2 Long pepper
3.3 Chili pepper
3.4 Sichuan pepper
4 How should pepper be stored?
5 Are there any benefits to eating pepper?

The fruit from the pepper plant is known as a drupe, as it only has one seed inside. This is what the peppercorn is. If you were wondering what the difference is between all of the different types of pepper, you have come to the right place.

Where does the pepper plant come from? 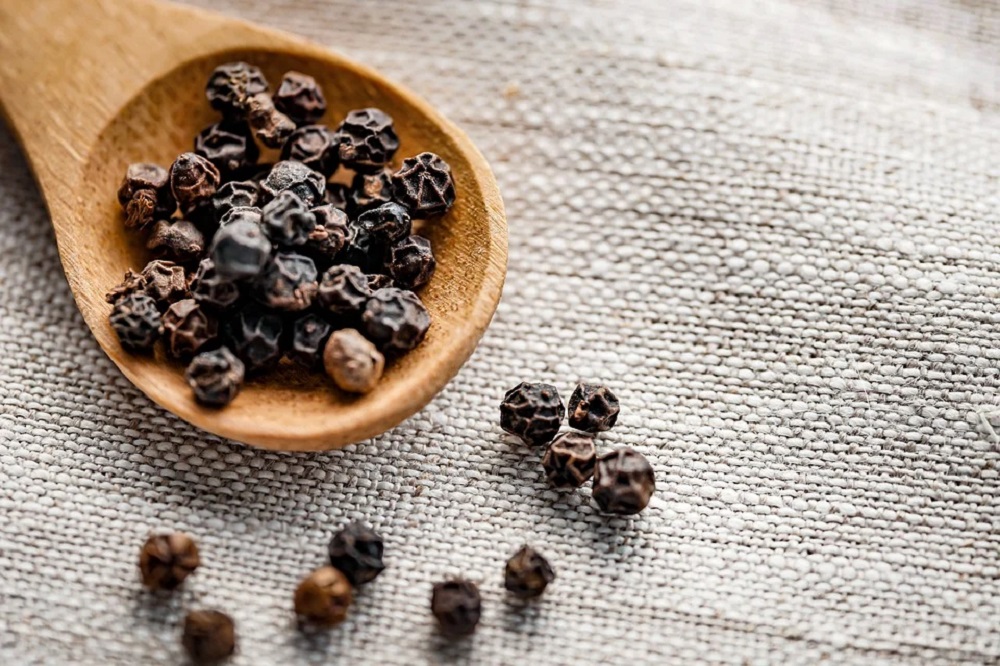 Piperaceae is a family native to the Southeastern region of Asia, most often found in Kerala. This is an area in the south of India, where pepper plants have been grown for all of recorded history. The plants need a consistently warm temperature and a decent amount of sunlight in order to grow well.

Since as early as the 4th century BCE it was an important spice. Known to the Greeks, the Egyptians, and the Romans, it was carried as part of the spice route to be traded across the globe. The spice route ran from the Malabar coast of India to Egypt and then Rome via the Red Sea.

Due to the cost and time involved with the importation process, pepper was valued as a luxury item. It was expensive and therefore only accessible to the rich, making it somewhat of a status symbol. It gained such value that it was used as an alternative form of currency for some time.

When the mummified remains of Pharaoh Ramses II were found, it was discovered that he had been buried with peppercorns in his nose. Part of the payment to the Goths when Rome fell was a ransom of 3,000 pounds of pepper.

When the 17th century rolled around, the spice route was controlled by the English and Dutch colonizers. The pepper was transported in large quantities, which eventually led to the drop in prices. Nowadays, pepper is so widely used that it is very inexpensive and accessible to all. It makes up one-fifth of all spices traded globally.

The biggest grower and exporter of peppercorns in the modern world is Vietnam, although Keralan peppercorns are believed to be of higher quality.

Why is pepper spicy?

This is due to a chemical compound contained within the plant known as piperine. This activates the same pain receptors on your tongue as the capsaicin found in chilies. This creates the sensation of heat within your mouth, without causing any damage to the cells or tissues.

This is the most commonly used pepper in the world and is the type that immediately comes to mind. The drupes are harvested when they are young and green. They are then very quickly cooked in hot water before being laid out to dry. As the peppercorns dry out, the outer skin wrinkles and blackens, giving the characteristic pepper look. The peppercorns are rarely used without being ground.

The berries to make white pepper are allowed to ripen before being harvested. This means that the berries are bright red. White pepper is made using only the seed contained within the drupe. The flesh is removed in a variety of ways and the seeds are dried out. They are then finely ground to produce white pepper.

White pepper is a common ingredient in Thai, Portuguese, and Chinese cuisine. It is also found in white sauces, mashed potatoes, and other pale-colored foods. This is because the color of black pepper would ruin the aesthetic appeal of the finished dish. It gives a slightly milder flavor than black pepper.

These are predominantly found in Southeast Asia. They are mature, ripe berries that are not hulled. These can be freeze-dried or pickled too and are commonly very expensive. They have a mildly sweet flavor.

Green pepper is also made using unripe drupes, but they are not allowed to dry out like black peppercorns. They tend to have preservatives added to help the peppercorns retain their green color.

Some green peppercorns are placed into containers of brine or vinegar to preserve them further. Sometimes you will come across dehydrated or freeze-dried versions, which are intensely flavorful. The flavor is milder than black pepper, and green is generally considered the mildest of all peppers.

Green pepper is a popular ingredient in Asia but is mostly unavailable to Western cooks. This is because it does not keep well, and so transportation and sale become problematic. They are found in delicate sauces, such as a traditionally made peppercorn sauce. They are very expensive to purchase as the drupes are picked very young, thus greatly reducing the yield.

What about the other peppers?

Despite the name, this is not actually a peppercorn or even related to the peppercorn plant. They are the fruit of a plant in the Anacardiaceae family, known as Schinus. They closely resemble the peppers mentioned above, despite being a completely different plant.

They have a mild peppery flavor. As they are from the Anacardiaceae family, people with cashew allergies should avoid them as they can cause very severe reactions.

These used to be a commonly known form of pepper, from the same plant genus as the ones mentioned above. The Latin name is Piper longum, and it used to be shipped across Europe with black pepper.

It has a much higher spice level than other peppers and is rarely found or used outside of Asia. There are many individual seeds encased in a long catskin known as inflorescence. The catkin is ground up and used in cooking.

This is from a completely different family of plants, Solanaceae, the same as tomatoes. Chili peppers come from the genus Capsicum. It was given the name pepper when it was brought to Spain and mistaken for black pepper due to the spicy flavor.

This pepper comes from a multitude of different species of prickly ash plants. The most commonly used are Zanthoxylum simulans and Zanthoxylum piperitum. The seed cases are dried out and the seeds are discarded.

As the name implies, the pepper is most commonly used in Sichuan and Chinese cuisines. It has a spicy flavor and has been reported to give a sensation of numbness localized in the mouth. The pepper can be a red or green-hued brown, depending on how it has been dried and harvested. The pepper can be used in larger, whole pieces, or ground to a fine powder.

How should pepper be stored?

If you are serious about your pepper, it is well worth investing in a pepper mill. These do not have to be hugely expensive, but it’s unbelievable the difference that it makes. These will allow you to grind your pepper freshly and to demand, making the aroma and flavor much more pungent.

Are there any benefits to eating pepper?

Black pepper has been studied extensively due to its longstanding history of use across the world. Practitioners of ancient Ayurvedic medicine have been using black pepper for thousands of years.

Black pepper is incredibly high in antioxidants. These help to protect your body against the harm caused by free radicals - unstable molecules that damage your body on a cellular level. Some of these are generated naturally through digestion and exercise, but these can build to dangerous levels.

Eventually, they can cause serious health conditions. Black pepper has high concentrations of piperine, a compound that has potent antioxidant properties.

It has also been proven to have anti-inflammatory properties in rat arthritis studies. This is believed to be due to the piperine compounds. There have not been sufficient studies in humans to corroborate this hypothesis.