The condiment market is saturated with hundreds of hot sauces, each one ranging in flavor and heat level.

Some are mild and savoury, others are a raging fire trapped inside a tiny glass bottle. And we all have our hot sauce preferences. So there’s no need to shame those people who prefer to enjoy a fruitier and sweeter sauce.

And if it’s a fruity hot sauce that you enjoy, then Wuju hot sauce is the product you have been looking for! Produced using natural ingredients, this experimental hot sauce captures the essence of traditional Thai cuisine.

But don’t just take our word for it, down below we have written an informative review that covers everything you need to know about this Asian-inspired hot sauce.

So why not take a look and see if this is the hot sauce you should have in your kitchen cabinet!

Where Does Wuju Hot Sauce Come From?

The Wuju Company was founded in 2015 by Lawrence Wu, a recently graduated college student who dreamed of reinventing the flavors of traditional Asian cuisine.

Upon graduating, Wu began working on a recipe for a new hot sauce that we believed would revolutionize the world. It was his goal to create a hot sauce that would be packed full of exotic spices but still retain enough mildness to be enjoyed universally.

Upon perfecting the recipe, Wu took to Reddit to spread the word about his new and delicious hot sauce.

The online reaction to the sauce was overwhelmingly positive, and soon Wu found himself heading a successful Kickstarter campaign to fund his new and growing company.

Today, the Wuju Company still produces its signature hot sauce, as well as a variety of other Asian-inspired foods.

Wuju products can now be found in most popular supermarkets, where they remain a particular favorite among the public.

Although Lawrence Wu is the man who made all of this possible, he often relates his success to his parents - two brave, first-generation immigrants who taught him everything he knows about food and traditional Asian flavors.

What Ingredients Are In Wuju Hot Sauce?

The original Wuju hot sauce is made using a unique blend of 16 natural ingredients, with each one drawing on a traditional Thai flavor.

This helps to create a hot sauce that truly captures the essence of Thailand, packing all the spirit of the exotic country into a single glass bottle.

The Wuju company prides itself on the addition of agave nectar to its original hot sauce recipe, as it is this ingredient that gives the sauce its unique and distinctive flavor.

Wuju hot sauce acquires the brunt of its heat from the yellow mustard and habanero peppers which are used to produce the base of the hot sauce - giving it a savory and rich taste.

However, Lawrence Wu never set out to create a hot sauce that was brimming with vast amounts of unnecessary heat.

He wanted to make a hot sauce that was flavorful and capable of being enjoyed worldwide. So to help combat the heat produced by the mustard and the peppers, he added the agave nectar to cut through the spice.

Wuju hot sauce also uses mango in the recipe to cut back the spice and heat, giving the sauce a strong fruity aroma that helps to make it a mild hot sauce alternative.

Because of its use of Asian ingredients and flavors, Wuju hot sauce arguably tastes more like an Asian curry than it does a traditional hot sauce.

But that isn’t necessarily a bad thing. If you are the kind of person who prefers to avoid hot and spicy sauces, then this could be a great alternative.

The sauce itself can be very sweet when consumed on its own or with food, with the sweetness being primarily produced by the added mango and nectar.

These ingredients work together to layer the sauce with a smooth and luscious flavor. We would even go so far as to describe the hot sauce as having a mild floral taste, which can prove delicious if you prefer a more aromatic heat.

However, this does not mean that the sauce itself falls solely into the sweet category of the heat scale.

The sauce does pack a spicy punch which can prove very effective when eaten in a curry.

This heat comes from the curry, mustard and peppers, which work together to accompany the sweetness with enough heat to make the overall consuming process enjoyable and rewarding.

What Can Wuju Hot Sauce Be Used For?

Wuju hot sauce is another sauce that can be used for a variety of different purposes. The sauce can be enjoyed as a condiment, a marinade, a dipping sauce or even just for a slight drizzle.

The sauce is particularly delicious when paired with foods such as chicken, eggs, pork chops, turkey and rice bowls.

Because Wuju hot sauce uses curry and other spices for its flavor, it can even be used as the basis of various Asian-inspired dishes and curries. 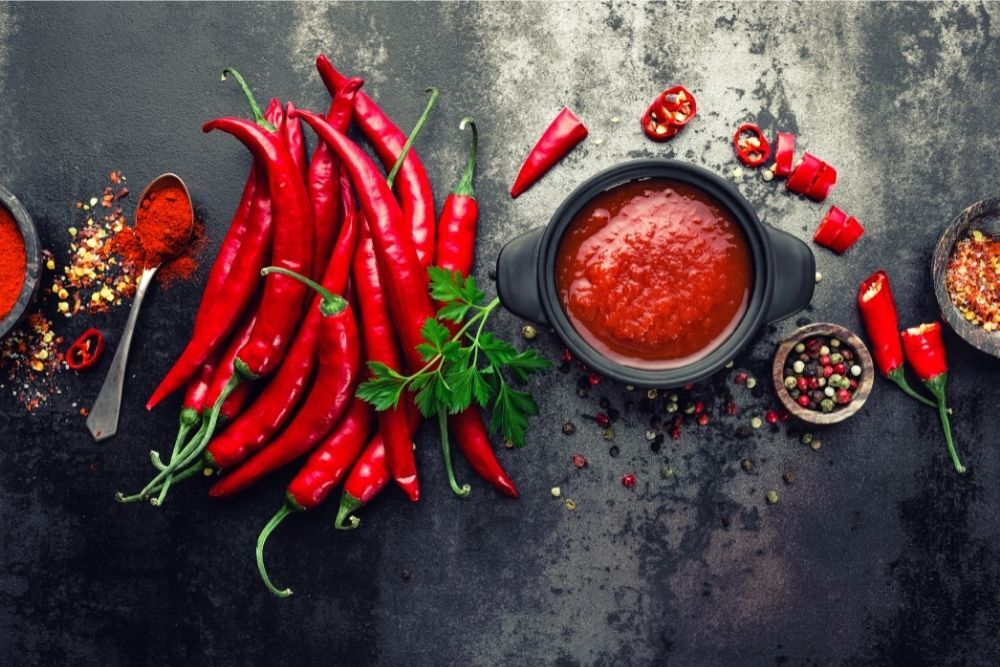 Is Wuju Hot Sauce Worth It?

Hasn’t our review been glowing enough? Although we wouldn’t classify Wuju as a hardcore heat machine, we do believe it has enough heat and flavor to satisfy most hot sauce lovers.

The sauce’s unique blend of ingredients gives it a unique and authentic Asian flavor that cannot usually be found among many hot sauces.

Wuju hot sauce also comes with a range of possibilities, as it can be used to cook and flavor an array of different meals and dishes.

There are many positive things to enjoy about this delicious hot sauce, and there’s very little to criticize. Although we would happily recommend it to any hot sauce fan, we do understand that its sweetness and fruitiness may not appeal to everyone.

We believe that this hot sauce is particularly perfect for those people who love cooking delicious Asian food with a little bit of kick.